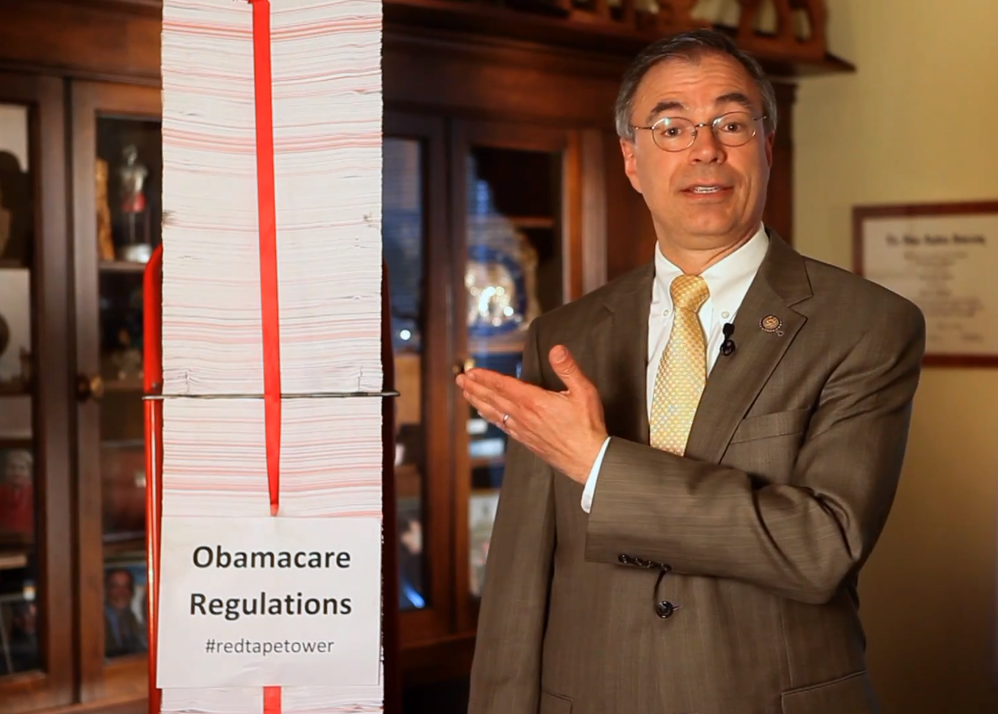 Rep. Andy Harris, R-Md., linked the ongoing targeting scandal at the IRS with Obamacare in the weekly Republican address on Saturday, warning that the troubled agency has too much control over the rules and regulations governing the implementation of the law.

Standing beside the "red tape tower," a 7-foot stack of regulations associated with Affordable Care Act, Harris said, "Just think about the fact that it's the IRS that will be responsible for enforcing many of these regulations."

"If we've learned anything this week, it's that the IRS needs less power, not more," he said.

He also noted that "the IRS official who oversaw the operation that's under scrutiny for targeting conservatives is now in charge of the IRS' Obamacare office."

Sarah Hall Ingram was the head of the IRS office overseeing tax-exempt organizations between 2009 and 2012, during which time the agency initiated a practice of paying additional - and often burdensome - scrutiny to conservative organizations applying for tax-exempt nonprofit status. While there is no evidence that Ingram sanctioned or was even aware of the targeting practices, conservatives have cried foul about her new role as head of the IRS' Affordable Care Act office.

Sen. John Cornyn, R-Texas, and Rep. Tom Price, R-Ga., have introduced twin bills in their respective chambers to prevent the IRS from having any hand in enforcing Obamacare. In a statement, Price explained, "When it comes to an individual's personal health care decisions, no American should be required to answer to the IRS - an agency that just forfeited its claim to a reputation of impartiality."

In his address on Saturday, Harris seconded those concerns: "As a physician for nearly 30 years, I've always believed the power in our health care system should belong to patients and their families, not politicians - and certainly not the taxman."

Warning that Obamacare will force Americans off their desired health-care plan, drive up health-care costs, and prevent businesses from creating jobs, Harris recalled the words of Sen. Max Baucus, D-Mont., one of the law's chief authors, who recently warned Health and Human Services Secretary Kathleen Sebelius during a congressional hearing that he sees "a huge train wreck coming" if the law is not implemented with due consideration.

Harris also knocked Sebelius for soliciting donations from health-care companies, including insurance providers and pharmaceutical businesses that "she herself regulates," to help fund a nonprofit organization working to publicize the law's benefits and encourage the uninsured to enroll in coverage plans.

"This raises all kinds of legal and ethical questions," Harris said, "and I assure you we will get those answers."

"Obamacare is knocking Americans off the ladder of opportunity," he warned, "and the sooner we repeal it, the sooner we can start fixing health care for working families."

In his weekly address on Saturday, President Obama also spoke of "ladders of opportunity," heralding signs of a healing housing market and a shrinking deficit as evidence that "things are looking up."

He also knocked Washington for preoccupying itself with controversy instead of job creation.

As part of his "Middle Class Jobs and Opportunity Tour," Mr. Obama has recently visited schools and businesses in Texas and Maryland, and in his address he embraced those opportunities to get out of the "Washington echo chamber whenever I can."

"Because too often, our politics aren't focused on the same things you are," he told his audience, "working hard, supporting your family and your community, making sure your kids have every chance in life.

"More than anything, the American people make me optimistic about where we're headed as a nation," he said, "especially after all we've been through the past several years. And that should encourage us to work even harder on the issues that matter to you."