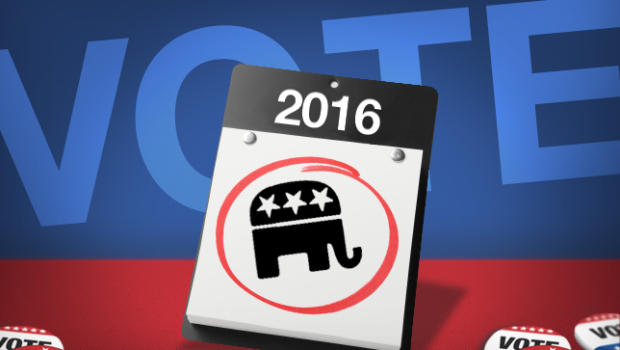 Republican leaders, forced to regroup after losing another race for the White House, voted to significantly shortening the lengthy, bruising state-by-state process that will select the party's presidential nominee for the 2016 election.

Party chiefs complain that the 2012 Republican nominee, Mitt Romney, was forced to suffer through a long, expensive primary process that left him battered and ultimately hurt his ability to compete against President Barack Obama in the general election.

The Republican National Committee approved Friday a plan that aims to create an easier path to the White House for its next nominee, roughly a year before campaigning begins in earnest for the next presidential contest. While Obama's second term began just one year ago, prospective Republican candidates already have begun visiting early-voting states like Iowa and New Hampshire that hold outsize influence because of their prized positions on the primary calendar.

Republicans have now lost the popular vote in five of the last six presidential elections. Party leaders emerged from Obama's re-election last November vowing that Republicans must rethink their strategies as the United States becomes a more diverse country, and the voting power of the party's base - traditionally white, older conservatives - begins to wane.

The latest U.S. census data and polling from The Associated Press predict a monumental change on the horizon for the U.S.: non-Hispanic whites will lose their majority in the next generation, somewhere around the year 2043.

Meanwhile, conservative grassroots Republicans who dominate the primary process never embraced Romney with much enthusiasm, making him a vulnerable target to other more conservative primary candidates like Newt Gingrich, the former House of Representatives speaker. Obama used many of the same attack lines on Romney - that he was an out-of-touch wealthy tycoon - that had been used by other Republicans in the primaries.

The party's shift comes during the winter meeting of the Republican National Committee, a collection of party leaders and activists from every state that controls the party's national infrastructure. The group expects to finalize additional changes, including setting a new date for its 2016 national convention, later in the year. Among other changes, the RNC intends to dramatically reduce the number of presidential debates and have more control over the moderators.

"This is a historic day for our party," RNC chairman Reince Preibus declared.

He said the changes would not allow Republicans to "slice and dice" each other for six months or participate in "a circus of debates." Republican candidates participated in 27 debates for the 2012 nomination.

Not everyone was pleased with the changes, which were approved by a 153-to-9 vote.

"I think we're going too far in shortening this process," Republican committeeman Morton Blackwell of Virginia said. "We need an adequate amount of time in order for presidential candidates to be tested."

New Hampshire, Iowa, South Carolina and Nevada are expected to host the first four contests in February 2016 under the new schedule, while the remainder of the nation's 46 states and territories would vote between early March and mid-May. The party's national convention is expected in late June or early July, roughly two months sooner than has become the norm.

Officials from early voting states praised the plan, which establishes strict penalties for states that jump out of order, as Florida did in 2012.

One potential Republican candidate, New Jersey Gov. Chris Christie, has seen his prospects of a 2016 presidential run complicated by scandal, as U.S. federal prosecutors have escalated their criminal investigation into allegations aides created traffic jams as political payback, subpoenaing his re-election campaign and the state Republican leadership. That has tainted the image Christie has cultivated as a bipartisan political player with broad appeal.

The subpoenas, disclosed Thursday, seek documents related to the closure of traffic lanes near the George Washington Bridge, which connects New Jersey and upper Manhattan, according to Mark Sheridan, a lawyer representing Christie for Governor and the Republican State Committee.

The traffic lanes were closed for four days in September, creating traffic gridlock in Fort Lee, the New Jersey town at the base of the bridge, one of the world's busiest. Some of Christie's aides initially said the closures were part of a traffic study, but emails and text messages turned over to legislators suggest it may have been a message to the town's Democratic mayor for not endorsing Christie.