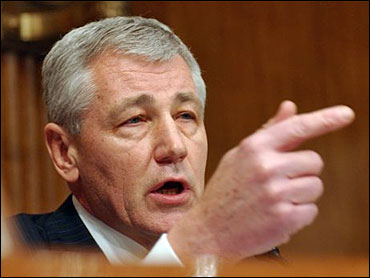 Nebraska Sen. Chuck Hagel, a persistent Republican critic of the Iraq war, intends to announce on Monday he will not seek a third senate term, according to Republican officials.

The officials also said Hagel does not plan to run for the White House in 2008, despite earlier flirting with a candidacy.

The 60-year-old senator arranged a news conference for Monday in Omaha, Nebraska, to make his formal announcement. The officials spoke on condition of anonymity to avoid pre-empting the event.

The decision by Hagel is the latest in a string of setbacks for minority Republicans in the Senate, who must defend 22 of the 34 seats on the ballot next fall.

Last week, Sen. John Warner of Virginia announced his retirement, a decision expected to create an intensely competitive race for a seat he probably would have held easily had he decided to run again.

Nebraska is one of the most Republican states in the nation, but Hagel's retirement could open the way for former Democratic Sen. Bob Kerrey to attempt a political comeback. Democratic officials have been in contact with him in recent weeks, hoping to recruit him to become a candidate if Hagel were to retire.

In addition, Alaska Sen. Ted Stevens faces a federal corruption investigation, and Sen. Larry Craig is expected to resign his seat following his arrest in an airport men's room sex sting. Craig pleaded guilty to disorderly conduct, but has hired a lawyer to try and withdraw his plea.

Hagel was elected more than a decade ago with a resume that included a tour in combat in Vietnam.

He has compiled a generally conservative voting record, yet emerged as one of the earliest and most biting Republican critics of the Iraq war.

In January, Hagel was the only member of his party on the Senate Foreign Relations Committee to support a nonbinding measure critical of President George W. Bush's decision to dispatch an additional 30,000 troops to Iraq.

"There is no strategy. This is a pingpong game with American lives," Hagel said at the time.

Later, he virtually lectured fellow senators about their responsibilities.

"If you wanted a safe job, go sell shoes," he said.

"This is a tough business. But is it any tougher, us having to take a tough vote, express ourselves and have the courage to step up on what we're asking our young men and women to do?"