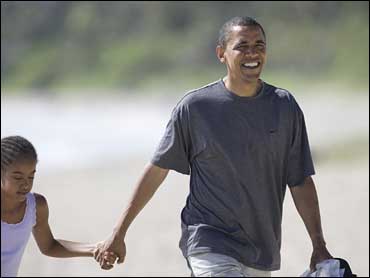 This column was written by Ari Berman.

In June the McCain campaign released a list of "prominent Democrats and Independents" supporting John McCain. Few of the names were prominent, and a review by the Huffington Post found that more than half of the list had "either obvious ties to the Republican Party or are regularly touted by GOP politicians as Democratic defectors."

The newly announced group of "Republicans for Obama" hope to have a more lasting impact. They certainly have a higher profile than McCain's Democratic defectors (other than top surrogate and possible veep Joe Lieberman). Organizers on a conference call this morning included former Iowa Congressman Jim Leach, former Rhode Island Senator Lincoln Chafee and Rita Hauser, a member of President Bush's Foreign Intelligence Advisory Board. The Republican Mayor of Fairbanks, Alaska also endorsed Barack Obama today. (There's an already existing Republicans for Obama website founded by John Martin, a Navy reservist who served in Afghanistan and lives in The Bronx.)

These so-called "Obamicans" -- throwbacks to the days of traditional Republicanism -- are disgusted by the Bush Administration's militant foreign policy, reckless spending and cronyism at home, and America's plummeting reputation in the world. In John McCain, they no longer see a maverick, but a continuation of the Bush-Cheney era.

"From my perspective, this is simply not a time for politics as usual," said Jim Leach, one of the smartest and most decent members of the House of Representatives, who represented eastern Iowa for three decades until 2006 and was one of only six House Republicans to presciently oppose the war in Iraq. "The case for inspiring, new political leadership and a social ethic has seldom been more self-evident."

Adds Leach: "Barack Obama's platform is a call for change. But the change that he is so gracefully articulating is more renewal than departure. While a break from the ideological policies of the moment, it is rooted in very old American values that are as much a part of the Republican as the Democratic tradition. There's an emphasis on individual rights, fairness and balance at home, and progressive internationalism."

Says Rita Hauser, "It is not traditional Republicanism to make war on everybody who disagree with you." The longtime foreign policy hand called McCain's response to the Russia-Georgia conflict "bellicose [and] threatening."

Like Leach, Lincoln Chafee is a reminder of the days when moderates could find a home in the Republican Party as advocates for fiscal responsibility, environmental protection and restraint in foreign policy. Chafee left the Republican Party in March to vote for Obama in Rhode Island's Democratic primary. He was the first Democrat Chafee had ever voted for.

Chafee served alongside McCain in the Senate; they were the only two Senate Republicans to oppose the Bush tax cuts in 2001. Chafee has since watched McCain adopt the very policies he once denounced. "Seeing the two different John McCain's is a fracture in his credibility," Chafee says.

How big of an impact this group will have remains to be seen. Obama performed well in traditionally Republican areas in the Democratic primary and attracted legions of "Obamicans" in swing areas like Doylestown, Pennsylvania. Yet partisanship has hardened since the primary has ended (usually the opposite occurs), with both Obama and McCain now drawing 90 percent support from self-identified members of their parties.

Both candidates have attempted to encroach on the other party's turf. McCain has made a bid for disaffected Clintonites, and elderly and blue-collar Democrats. Obama has courted moderate and suburban Republicans in swing states like Virginia and libertarians out West. It only takes a few points here or there to alter the election.

Hauser says the "Republicans for Obama" website will be online tomorrow and will include "a couple of hundred thousand names. We hope it will grow exponentially as we go through the campaign."
By Ali Berman
Reprinted with permission from The Nation