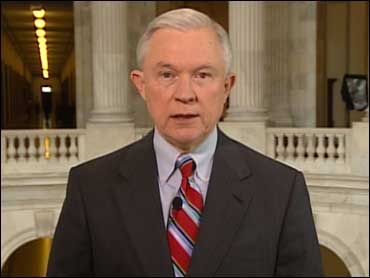 Republicans in the Senate are suggesting that Goodwin Liu, President Obama's nominee to the Ninth Circuit Court of Appeals, tried to keep controversial information from his past secret from the Senate Judiciary Committee by failing to disclose more than 100 speeches and other background materials.

Liu, a law professor at Berkeley, provided supplementary materials to the committee Monday after committee members complained that items disclosing his views on affirmative action and other issues were not submitted. He offered his apologies and said he had not purposely omitted documents.

In a letter to Judiciary Committee chairman Sen. Patrick Leahy, GOP Sen. Jeff Sessions (pictured), the Ranking Member of the committee, said that based on the "glaring omissions" Liu may have "knowingly attempted to hide his most controversial work." The letter was signed by all seven Republicans on the committee.

"Professor Liu's unwillingness to take seriously his obligation to complete these basic forms is potentially disqualifying and has placed his nomination in jeopardy," Sessions wrote.

As Fox News notes, Republicans have in the past objected to Liu's writings that people have a right to health care and that Americans should take an evolving view of the Constitution as time passes. His hearing has already been postponed twice.