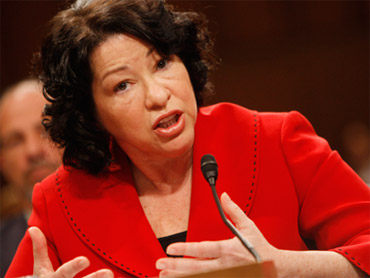 (AP)
The best exchange of the day occurred between Senator Kyl and the judge in talking about his concerns about her Wise Latina comment. Remember, he's a Senator from Arizona with a large Hispanic population and I think he got about the best explanation we can hope to expect from her about why she said what she said.

It's clear that the Republican members aren't sold on the nominee's explanation of her now famous "Wise Latina" comment—you can hear the skepticism in their voices and see it in her faces. But she has kept to her story—which is that she was encouraging young lawyers to be proud of their heritage but wasn't telling them to put background above impartiality.

The judge repeatedly refused to answer any of Senator Feingold's questions about terror law issues and he accepted her demurrals over and over again. He took a very different stance when he got similar answers from Republican nominees Roberts and Alito. Then it was GOP Senators who politely accepted non-answers as answers from nominees.

click here to watch a live vide feed and analysis of Sotomayor's hearing.

(CBS)
Andrew Cohen is CBS News' Chief Legal Analyst and Legal Editor. CourtWatch is his new blog with analysis and commentary on breaking legal news and events. For columns on legal issues before the beginning of this blog, click here. You can also follow him on Twitter.