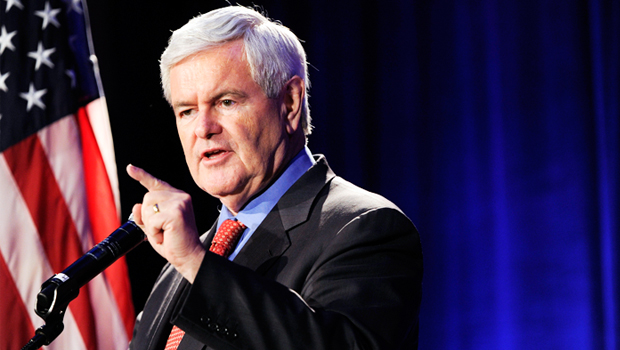 On Fox News’ “On the Record with Greta van Susteren” Tuesday, amidst a barrage of tough questions from the host about his Meet the Press appearance and Tiffany’s credit line, Newt raised the 10th Amendment again and got a little more specific: “My campaign is going to offer a lot of very large changes, including a 10th Amendment implementation bill which enforces the 10th Amendment to the constitution and takes a great deal of power out of Washington and sends it back home.”

For most members of the Tea Party, “enforcing” the 10th Amendment is actually a very familiar rallying cry. “Tenthers,” as they are often called, believe in a strict interpretation of the 10th Amendment, which says that “the powers not delegated to the United States by the Constitution, nor prohibited by it to the States, are reserved to the States respectively, or to the people.”

So in the radical tenther interpretation, if the Constitution doesn’t explicitly say the federal government can do something, it can’t. Therefore, Medicare, Medicaid, Social Security, federal minimum wage laws, bans on segregation and workplace discrimination, environmental regulation, and many more staples of progressive government would be impermissible at the federal level.

As Ian Millhiser, a policy analyst for the Center for American Progress, has noted, tentherism has a long history on the right. After the Supreme Court handed down Brown v. Board of Education, 19 Senators and 77 representatives endorsed a “Southern Manifesto” declaring that Brown "encroach[es] on the rights reserved to the States" because the "Constitution does not mention education." President Franklin Delano Roosevelt battled a tenther contingent on the Supreme Court, which struck down parts of the New Deal on 10th Amendment grounds. (He criticized them in his second inaugural address, saying “the Constitution of 1787 did not make our democracy impotent.”)

While echoes of tentherism could be heard in the “states rights” arguments against civil rights in the 1960s, it largely fell out of favor thereafter. To believe in tentherism would be to dismantle most of the last century’s progress and almost completely eliminate all elements of the welfare state.

As one might expect, however, Tentherism has made a comeback inside the Tea Party movement, as evidenced by one of the main candidates openly advocating for a re-interpretation of that crucial amendment. It’s ironic that while saying Paul Ryan’s plan to privatize Medicare was too “radical,” Gingrich was simultaneously proposing that much of the federal government’s social programs should be terminated and taken up by the states.

Newt is a longtime adherent to tentherism. As Slate’s Dave Weigel noted, Gingrich’s 1998 book Lessons Learned the Hard Way, said the 10th Amendment “was added to the Constitution in the first place because the Founding Fathers wisely feared the possibility of the untrammeled growth of a centralized federal government.” When Gingrich visited the Georgia governor’s mansion in March in what many thought was going to be a presidential announcement, he was actually meeting the governor to discuss establishing a “Tenth Amendment Team” in the state government to defend Georgia’s constitutional rights.

The 10th Amendment bill Gingrich floated Tuesday, one of the first major ideas he’s proposed since declaring his presidential run, makes it clear that he’s ready to go all-in on tentherism. (Hopefully mainstream reporters will probe Gingrich on what, exactly, he thinks the federal government should no longer do. Would President Gingrich terminate Social Security?)

Gingrich will try to rally the Tea Party troops with tenther rhetoric, but he won’t be alone. Tim Pawlenty and Mitt Romney, both considered top contenders for the nomination, have also promulgated 10th Amendment theories.

Mitt Romney’s entire defense of his Massachusetts health care law is actually based on tenther logic. He says his plan is fine at the state level, but asserts the federal government can’t enforce a similar plan on everyone because “I think it’s unconstitutional on the 10th Amendment front.”

Similarly, Pawlenty flirted with tentherism as governor of Minnesota, when he threatened to block implementation of health care reform on 10th Amendment grounds, and praised many Republican governors who were starting to “get more aggressive about asserting and bringing up the 10th Amendment.” (He quickly backed off that threat amidst intense criticism).

Neither Pawlenty nor Romney seem likely to build a movement around a radical tenther interpretation of the Constitution—asked by a reporter what other programs he thought violated the 10th Amendment, Romney said “I don’t have any I can point to at this stage.”

But both men are clearly open to using the 10th Amendment as a wink to Tea Party voters, and tentherism is likely to play an increasingly prominent role in the GOP nomination process. Gingrich seems poised to put it front and center, and if Rep. Michele Bachmann joins the race, she is also a longtime proponent of tenther interpretations. How much further might they push the major candidates to embrace strict 10th Amendment interpretations? That might make an interesting question for the primary debates.

Bio: George Zornick is a writer for the Nation. The opinions expressed in this commentary are solely those of the author.