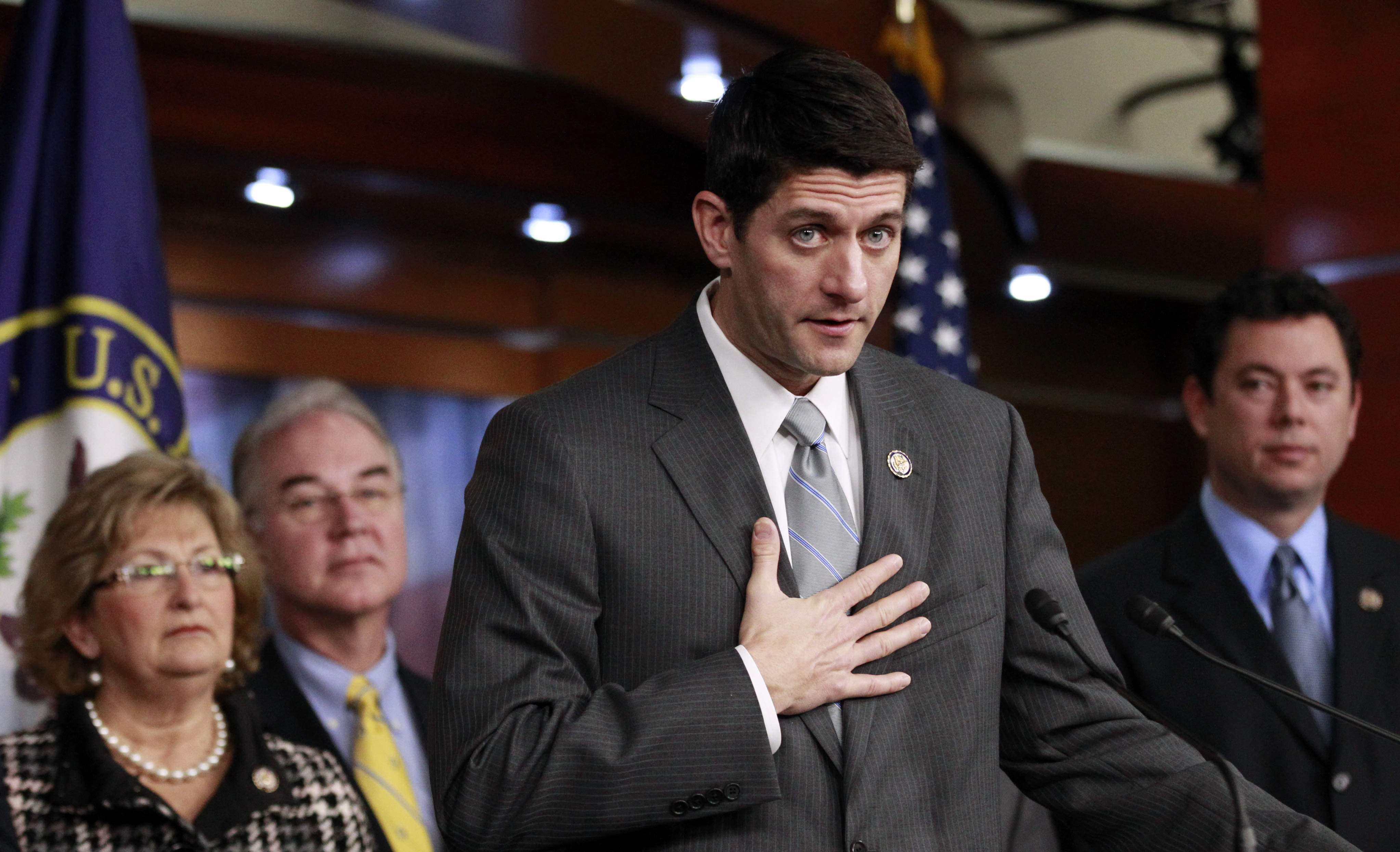 (AP) WASHINGTON - The Republicans who control the House are using cuts to food aid, health care and social services like Meals on Wheels to protect the Pentagon from a crippling wave of budget cuts come January.

The reductions, while controversial, are but a fraction of what Republicans called for in the broader, nonbinding budget plan they passed in March. Totaling a little more than $300 billion over a decade, the new cuts are aimed less at tackling $1 trillion-plus government deficits and more at preventing cuts to troop levels and military modernization.

Meanwhile, the House Appropriations Committee unveiled a $608 billion defense spending bill that restores some of the programs the Pentagon wanted to cut next year and provides nearly $1 billion for Israeli missile defense programs.

The House Budget Committee meets Monday to officially act on the measure, the product of six separate House panels. It faces a likely floor vote Thursday.

The measure kicks off Congress' return to action after a weeklong recess. The House will also vote on a spending bill funding NASA and the Justice Department and on legislation to reauthorize the Violence Against Women Act. The Senate, meanwhile, has a test vote slated for Tuesday on a plan backed by President Barack Obama to prevent a doubling of college loan interest rates.

Fully one-fourth of the House GOP spending cuts come from programs directly benefiting the poor, such as Medicaid, food stamps, the Social Services Block Grant, and a child tax credit claimed by working immigrants. Federal workers would have to contribute an additional 5 percent of their salaries toward their pensions, while people whose incomes rise after receiving coverage subsidies under the new health care law would lose some or all of their benefits.

The budget-cutting drive is designed to head off a looming 10 percent, $55-billion budget cut set to strike the Pentagon on Jan. 1 because of the failure of last year's deficit "supercommittee" to strike a deal. The Obama administration and lawmakers in both parties warn the reductions would harm readiness and weapons procurement, and reduce troop levels.

The panel provided $278 million for a version of the Air Force's Global Hawk, the high-altitude unmanned aircraft used for intelligence, surveillance and reconnaissance. The Pentagon wanted to mothball 18 of the drones.

The automatic spending cuts, known as a sequester, would strike domestic programs as well, including a 2 percentage point cut from Medicare payments to health care providers. The sequester required by the supercommittee's failure would abruptly wring about $110 billion in new spending from next year's budget, but the upcoming GOP measure is more gentle in the near term, cutting deficits this year and next by less than $20 billion — though the cuts add up to more than $300 billion over the coming decade.

"The question is whether or not to just let the sequester occur ... or whether to be more targeted, reasonable and responsible," said Rep. Tom Price, R-Ga. "The last thing we want is those kinds of reductions in defense spending."

Some of the cuts may or not be realistic, though, despite the seal of approval of the respected Congressional Budget Office. Particularly dubious is $22.5 billion in savings claimed by repealing new "orderly liquidation" authority awarded to the Federal Deposit Insurance Corp. to prevent the failure of large financial firms from endangering the economy. Costs would be offset by assessments on other institutions over subsequent years.

"Any money that is spent the secretary of the Treasury is directed to recover from institutions with $50 billion or more in assets," said Rep. Barney Frank, D-Mass., a key architect of the 2010 financial reform law.

And $56 billion in savings over 10 years from Medicare and Medicaid as a result of curbing medical malpractice lawsuits is speculative, too, relying on a CBO estimate that assumes changes like capping punitive damages will produce a half-percentage-point cut in health care spending.

The cuts will be dead on arrival in the Democratic-controlled Senate this year. But they're likely just a sample of what's in store next year from Republicans if Mitt Romney wins the White House and the GOP takes back the Senate. Romney promises much tougher cuts to domestic programs and an even bigger boost in the Pentagon's budget, while the House GOP budget promises sharp cuts to Medicaid and a dramatic overhaul of Medicare for future beneficiaries.

Warring Democrats and Republicans hold sharply opposite views of the cuts.

To GOP lawmakers, steps like blocking states from gaming food stamp eligibility rules to boost benefits or trying to stop illegal immigrants from claiming tax refunds of up to $1,000 per child are simply no-brainers. And they won the 2010 midterm election after campaigning against Obama's health care law.

But Democrats say Republicans are unfairly targeting the poor and vulnerable. They believe that legislation to prevent the Pentagon cuts should include tax increases that strike wealthier people.

The proposed GOP cuts pale in comparison to the $5 trillion in cuts called for over the coming decade by the broader — but nonbinding — GOP blueprint, authored by Budget Committee Chairman Paul Ryan, R-Wis., who's often mentioned as a potential vice presidential choice. They're getting far less media attention as well.

Stepping into the debate, however, has been the U.S. Conference of Catholic Bishops, who forcefully oppose cuts to programs that help the poor and vulnerable, singling out cuts to food stamps as "unjustified and wrong" and assailing the effort to deny the child tax credit to undocumented workers as sure to thrust vulnerable children into poverty. The vast majority of children who would be affected by the tax credit proposal are U.S. citizens.

Republicans would also eliminate Social Services Block Grants, a $1.7 billion a year program that gives states money for Meals on Wheels, day care, adoption assistance, and transportation help for the elderly and disabled. Democrats noted that the program comes in the form of flexible block grants, an approach that Republicans advocated in the Ryan budget regarding Medicaid and food stamps. Republicans say the Social Service Block Grants program duplicates other efforts.