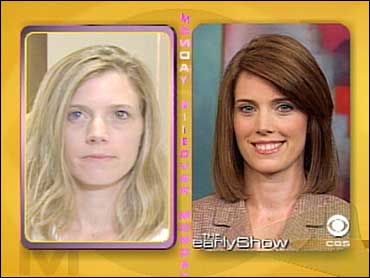 With the Republican National Convention in New York coinciding with the Monday Makeover, stylist to the stars, David Evangelista, decided to transform Ohio Republican delegate Cheri Hottinger just hours before the convention got into full swing.

The 35-year-old Newark, Ohio, delegate is the Interim President for the Newark and Licking County Chamber of Commerce, Treasurer/Office Manager for the Jay Company, Inc. (an electrical contractor), and is married to Ohio State Senator Jay Hottinger. The couple has three daughters (Savannah, Regan and Jayme, ages 2 to 9).

"She had, like, blond highlights, and they were drab looking, and she needed more of a lift," Evangelista said.

She described her look as "relatively conservative," with her hair in a blunt bob, conservative makeup and clothing.

Since she has such busy schedule (Hottinger has two jobs with two offices, and she volunteers at her daughters' school, her community and the local Republican party), she doesn't have much time to put into her "look" every day.

So, to give her a transformation from head to toe, Evangelista started the makeover at the John Barrett Salon, where he gave her a more stylish, chic, updated 'do with the help of John Barrett's color director, Parvin Klein, who applied a walnut/pecan color on her hair.

"Browns and pecan and almond are smashing for the fall and perfect for her skin tone," Evangelista explained. As for the haircut, he added, "I took a lot of the bulk out of her hair. Her hair was very dense, and I cut a lot of the bulk out so it will be quicker to get a brush through and blow dry it out."

Evangelista noted, "Dana applied a light base to her and concentrated on giving her a berry lip, which is a hot trend for the fall. She is giving her eye shadow on the lash line, which is simple for a working mom."

To finish, Hottinger got a hip new outfit from Bergdorf Goodman.

"I love it," Hottinger said about her new look and expects her husband and children to like it as well.

Asked if she thinks it is a look she can maintain, Hottinger said, "This will be a nice change for me, and I think it will free up the process."

As she embarks on the convention week, she said she looks forward to meeting the president. "That would be the highlight of my week," Hottinger said.