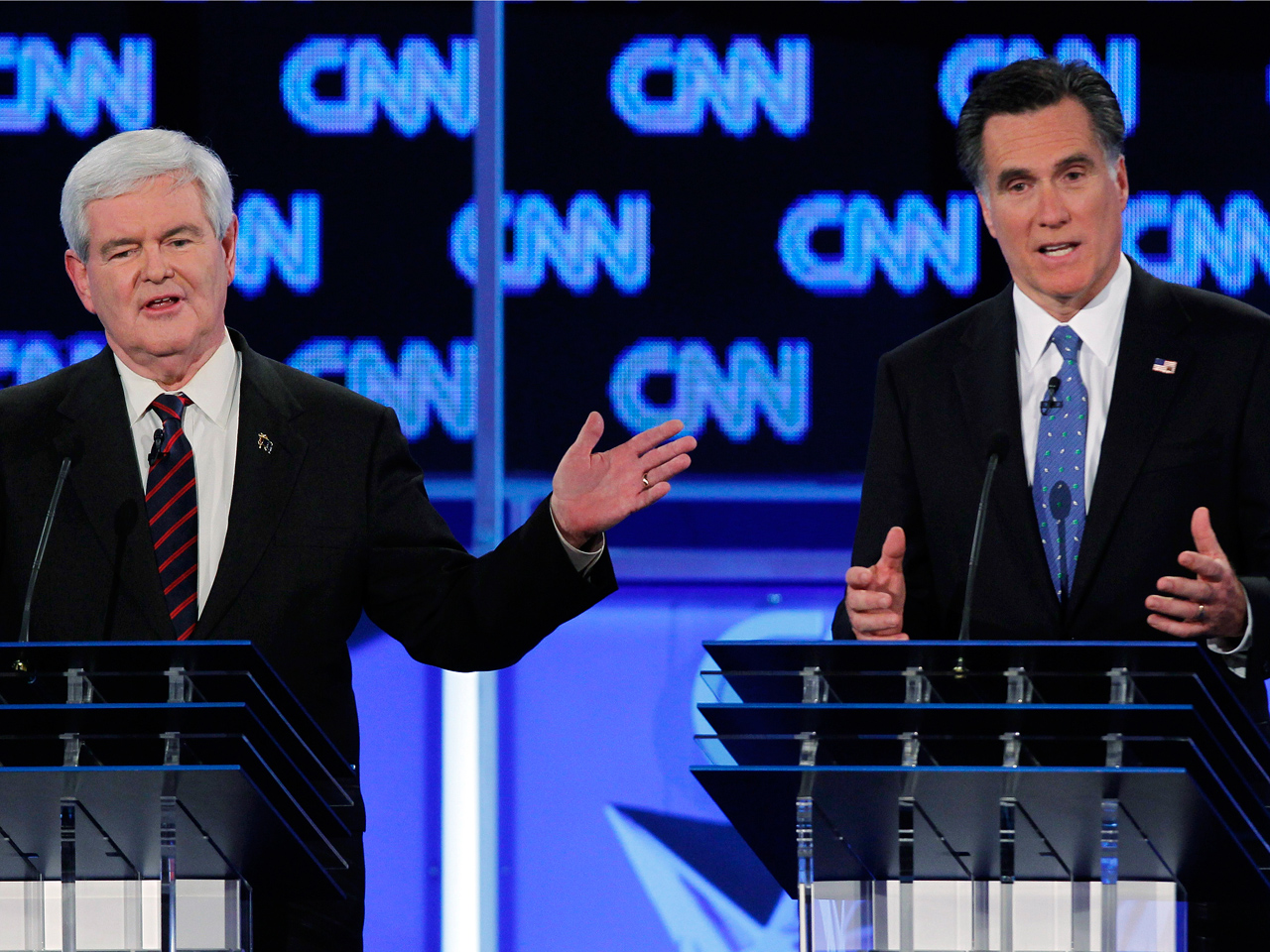 Mitt Romney may not drink, but he was loaded when he entered last night's debate in Jacksonville, Fla. He went after Newt Gingrich immediately and relentlessly. He scolded him, rendered him momentarily mute, and took answers about other topics and turned them into attacks on Gingrich on key issues like excessive government spending. Romney didn't just have good answers, he looked like a man in command of himself. His new debate coach Brett O'Donnell should double his fees.

There are now five days until the Florida primary, and state polls show that Romney and Gingrich are neck and neck. Newt Gingrich is up 9 points over Romney in the latest NBC/Wall Street Journal poll. Romney's strong performance will give him a little spring in his step and make his supporters feel like they're backing a winner again. Florida has 10 television markets, and if the editors and producers are good to Romney, he'll get about 12 hours of free coverage of the debate.

Romney was not flawless, but he showed aptitude over a wide range of subjects, learned new material, and adapted to the challenges he faces. For a candidate that has been called robotic he was nimble.

Romney started right away. If a candidate can deliver a strong moment that will run throughout the next day on cable and on local news, he wins the night. You just have to be good once, and preferably early in the evening. Romney had to know that Gingrich's claim that Romney was "anti-immigrant" would come up, and it came up early. He took offense and then took a hairbrush to Gingrich's bottom. He said the attack was "repulsive," called on Gingrich to apologize for the "kind of over-the-top rhetoric that has characterized American politics for too long."

Gingrich, inexplicably continued to defend the sentiment behind the "anti-immigrant" ad that he pulled down and that Sen. Marco Rubio had criticized. It gave Romney a chance to look indignant. This provides us with a quirk of political theater: Romney, who is authentically stiff and robotic in his natural state, looked "authentic" in what was no doubt a staged moment.

Romney also finally gave his best defense yet of his taxes. After Gingrich dared him to explain his Swiss bank account, Romney launched into a riff he'd clearly tried out a few times in front of the mirror. "I think it's important for people to make sure that we don't castigate individuals who have been successful. Let's put behind us this idea of attacking me because of my money."

He was in Gingrich's face all night. He criticized Gingrich for his ambitious plans to colonize the moon. "If I had a business executive come to me and say they wanted to spend a few hundred billion dollars to put a colony on the moon, I'd say, 'You're fired.' (Remember just a few weeks ago when Romney couldn't say the word fired? That's OK it was Newt he was firing.) "At another time he kneed Gingrich for pandering to local politicians, offering a new project in every state he visited. "This idea of going state to state and promising what people want to hear, promising billions, hundreds of billions of dollars to make people happy, that's what got us into the trouble we're in now. We've got to say no to this kind of spending."

During an exchange over Fannie Mae and Freddie Mac, Gingrich offered a blustery attack on Romney's investments in the two companies. Romney pointed out that Gingrich had identical investments. "Right," was all Gingrich could say, as if being guilty of the charge he had just leveled at Romney were totally natural.

The pressure was so relentless that Gingrich, one of the great exaggerators in politics, was accusing Romney of using that tactic. I assume in the Romney debate camp they took it as a compliment.

It was not a universally good night for Romney, though. He denied that he was running an ad that his campaign was, in fact, running. In the radio ad, he accuses Gingrich of calling Spanish a "ghetto language." When Wolf Blitzer pointed out that Romney had actually said at the end of the ad "I'm Mitt Romney and I approve this message," Romney mumbled. For the audience at home it was probably confusing, but Romney looked like he was weaseling, not owning up to his words. He also sounded like he was ducking when talking about how his investments are in a blind trust he doesn't control. True, perhaps (though some accounts he does see), but it doesn't sound good. When Romney in response to Santorum's passionate critique of his health care plan said, "It's not worth getting angry about," you could hear those conservatives who have doubts about him say ... and that's our problem with you.

Newt Gingrich had a floppy night. It wasn't because the audience was prohibited from cheering. They just didn't cheer much for him. He didn't seem to have a game plan. Backed into a corner at one point, he said smugly to Romney, "I'll give you an opportunity to self-destruct." It didn't work.

He was even the least effective attacker of the media. He had to follow on after Rick Santorum had interrupted the bickering of the front-runners to call for a return to the issues. Gingrich tried to echo him, arguing that it was OK to attack Romney for his tax returns in a TV interview but "nonsense" to try to get him to talk about it during the debate--a theory that is itself nonsense. Moderator Wolf Blitzer stood his ground. For a man who has profited from the debates and promises to whup Obama in the debates, to shrink from repeating onstage what he says in interviews was confusing and weak.

Rick Santorum had another strong night. If you were judging in a vacuum, you could make the case that he had the best performance. He repeated his claim that he was the best person to debate health care reform with Barack Obama because he had not flirted with the individual mandate. "Folks, we can't give this issue away in this election. Those are not the clear contrasts we need if we are going to beat Barack Obama." Santorum's problem is that he doesn't have the money to run ads in the state and his debate performance, while strong, won't be enough to start a brushfire.

Ron Paul has been increasingly impish in the last few debates. Tonight he was piercing and funny. He had a quip for everything. What would you do if Fidel Castro called, he was asked. "I'd talk to him," he said, not joining the other Republican candidates in pre-assigning Castro to different kinds of hell. In discussing the possibility of exploring the moon, he suggested sending some politicians there.

Obama's New Defense Cuts Are Too Modest. He Could Cut Even More.
The Alinsky Model
Was the Grand Inquisitor more humane than George Bush?