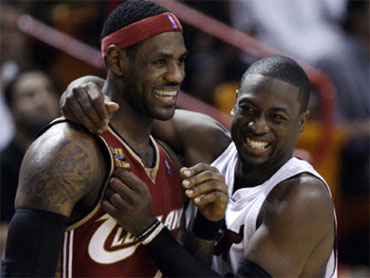 This story was written by CBSSports.com's Ken Berger

About 12 hours after Chris Bosh joined Dwyane Wade in committing to the Heat, two reports emerged Thursday morning saying LeBron James was leaning toward joining them.

ESPN's Chris Broussard, who first definitively reported Bosh's decision to team up with Wade on Wednesday, followed up about an hour later on Twitter, saying that James "will join Wade and Bosh in Miami, barring a late change of heart."

James' agent, Leon Rose, did not return a call from CBSSports.com early Thursday. A high-ranking member of the Cavaliers organization was unaware of James having made a decision.

On ESPN News, a sister station of the NBA rights-holding network that will air the announcement of James' decision at 9 p.m. ET Thursday, Broussard said James "still has time to change his mind" and called it "a fluid situation."

Even with the higher than expected $58.044 million salary cap announced Wednesday by the NBA for the 2010-11 season, the Heat don't have the space to fit two max contracts starting at $16.57 million next season under their $31.4 million in cap space after accounting for Wade's deal starting at the same amount. With only Michael Beasley and Mario Chalmers under contract heading into the signing period that began at 12:01 a.m. ET Thursday, that leaves only three options for Miami to form its Dream Team: 1) Send Beasley to Toronto in a sign-and-trade arrangement for Bosh, which sources have indicated is highly unlikely; 2) trade Beasley to another team with cap space, such as Sacramento, Minnesota or Washington; or 3) persuade its new Big Three to accept less than maximum salaries -- a shade less than $16 million in the first year of the deals would work -- for the right to play together.

The $1.944 million increase in the league salary cap above the most recent estimate of $56.1 million given by the league in April meant that the superstar triumvirate wouldn't have to leave as much money on the table as previously thought to fit into the Heat's space. Plus, Florida's lack of a state income tax would mitigate any losses the three superstars would incur.

It's a fluid situation, indeed. The buzz among NBA front office executives Wednesday pointed toward the Knicks making a late push to persuade James to join Amar'e Stoudemire in New York. Another executive within the league -- who has ties to all three of the top free agents -- said the most likely scenario was for James to announce Thursday that he's returning to the Cavaliers. Front office sources with teams in pursuit of James still were in the dark Wednesday about what team James would choose.

"Everyone is on the LeBron yo-yo a little bit," one front office executive said.