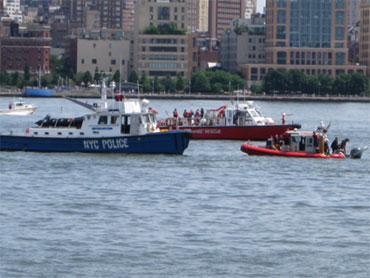 (CBS)
There are a couple of bits of information that didn't make it into our "CBS Evening News" piece on today's story about the mid-air crash over the Hudson river. One is a bit heart wrenching and another is, well, infuriating.

The Associated Press reports that inside the Liberty Tours Helicopter were a group of five friends vacationing from Bologna, Italy. One family had come to New York to celebrate their 25th anniversary. The father and son, made it onto the chopper. The mother was too scared to fly in a chopper. The other three tourists were friends of the family celebrating. The kids were friends and so were the fathers. The website for Liberty Tours still says "for a once in a lifetime experience."

The infuriating factlet or two comes from a report released just last month by the Department of Transportation regarding the safety discrepancies between on-demand aircraft and commercial ones. On-demand flights are an entire category - everything from an organ donor flight, to a sightseeing tour, to a small chartered jet. The most interesting thing to me, besides all the differences in safety requirements, was that many of the report's recommendations in July were echoing ones made in September of 2005 by an FAA subcommittee which studied rulemaking for two years before it came to its recommendations. Also infuriating is that some of the steps the FAA is taking to comply with the recommendations will take another four years.