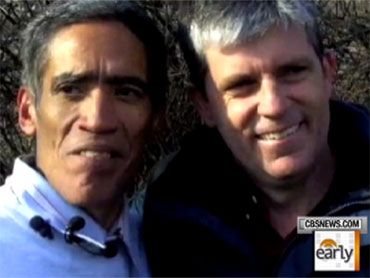 Ted Williams has come a long way from panhandling on an Ohio roadside. But his superstardom would never have happened if one curious journalist at a local newspaper hadn't found him and introduced him to the world.

Doral Chenoweth, a videographer with the Columbus Dispatch, said on "The Early Show" Friday it was six-to-eight weeks ago when he spotted Williams panhandling at an Ohio interchange, offering his "golden voice" in exchange for cash from passersby.

Chenoweth captured the now-famous video with a simple flip cam.

Chenoweth told "Early Show" co-anchors Chris Wragge and Erica Hill he wasn't satisfied with the video's technical quality. In fact, he even thought about going back to interview Williams again, "but I never saw him again out there at the interchange. He was there, my wife saw him one day, but I never saw him again. So, you know, that was -- I wasn't able to retape it."

For weeks, the video stayed on Chenoweth's computer.

"I had no inclination that it was going to take on the magnitude
that it has. ... (We) sat on it all through the holidays," Chenoweth said. "We got busy with some other news in Columbus, there was the holidays. I was swamped with stuff to do and the new year started this week, Monday. I thought, 'You know, it's a slow news day, there's nothing going on. Hey, I've got that video of the homeless guy with the golden voice on my computer.' I checked it over, put it on Dispatch.com and it sat there. On Monday, it didn't have a whole lot of traffic. And then, Tuesday, it just took off."

Wragge said, "You gave the right guy a shot, that's for sure. Rolled down that window and talking to him for a second, you've changed a couple of lives."

Chenoweth said the Williams' story gives him "a warm feeling."

But will Williams be able to turn his life around from his admitted past drug and alcohol addicitons?

Williams' mother, Julia, has shown some reserve about her son's future, saying in an "Early Show" interview Friday morning her son was like the Prodigal Son returning home.

He said, "She kind of represents a lot of women, a lot of mothers whose sons have gone wrong, and yet she's seen him come back home and she wants him to have the best life possible. And she's not going to put up with any funny business from him, I'm sure."

Chenoweth, who regularly reports on the homeless in the Columbus area, reminded viewers on "The Early Show" about the plight of the less fortunate across the country.

"Let's not forget about the 800 and more homeless people on the streets of other cities. A week ago, he was sleeping in a tent,, and now he's sleeping in some New York City hotel. (There are) a lot of people out there who need help."

For Chenoweth's entire interview, click on the video below.

And for more with Ted Williams and his rise to fame, check out these videos from MyColumbusMagic.com:

• Williams shows Radio One how he lived on the streets.