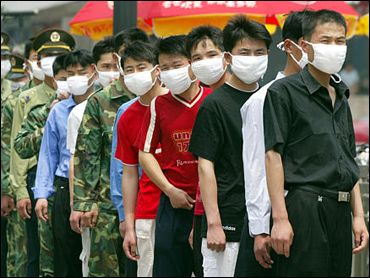 The United States is ill equipped to handle a major outbreak of the deadly SARS virus, according to a report commissioned by the federal Centers for Disease Control and Prevention.

The study, conducted by University of Louisville researchers and submitted Monday, cites a lack of specialists who study diseases, along with cuts in state and local health department budgets.

"The current shortage of epidemiologists, public health nurses and other personnel in the U.S. will reach a crisis stage in the event of an epidemic," the report says. "If these positions are not restored, an otherwise containable epidemic may spread rapidly."

Though the most recent SARS epidemic was contained, health officials say it could re-emerge any time, possibly aided by an expected worse-than-normal flu season.

Severe acute respiratory syndrome was first reported in Asia in February. Over the next few months it spread to more than 25 countries in North America, South America, Europe and Asia.

The disease infected about 8,000 people, killing some 780. The CDC reported Oct. 1 that 164 people in the United States had been infected, but no deaths were reported.

Among the recommendations offered in the report to prepare the nation for a SARS outbreak:

The report has "provided information for us to consider and take under advisement," CDC spokesman Von Roebuck told The Courier-Journal in Wednesday's editions.

SARS would strain public health systems because of the time involved in tracing cases — nine hours per case during the Toronto outbreak — and the fact that in some countries, health care workers themselves suffered a substantial portion of the fatalities.

The report also dealt with the legal aspects of SARS — namely, when and how to enforce a quarantine of suspected cases.

"Public health laws need to be flexible enough to permit appropriate responses to new epidemics and new circumstances, and public health officials and professionals need to be familiar with the statutory and regulatory procedures for invoking their (or the governor's) authority for quarantine and isolation as well as the mechanisms to enforce directives," the report read.