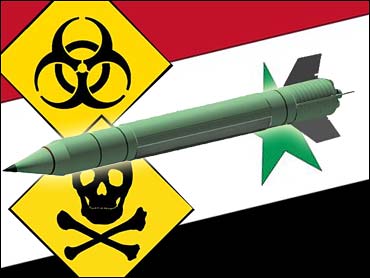 Syria test-fired three Scud missiles, including one that broke up over Turkish territory, The New York Times quoted Israeli military officials as saying.

No one was hurt in the tests on May 27, the paper's Web site said. It noted the tests coincided with the first Lebanese elections since Syria's hold on the country was shaken after the February assassination of Rafik Hariri, Lebanon's former prime minister.

The unidentified Israeli officials described the tests as the first such by Syria since 2001 and said they were part of efforts to develop missiles that can deliver chemical weapons.

Israeli security sources say the missiles, developed with North Korean technology, can strike anywhere in the Jewish state, reports CBS News Correspondent Robert Berger. Syria is no match for the high-tech Israeli military, but Israel is vulnerable to attacks with ballistic missiles. Israel and the U.S. are jointly developing an anti-missile shield for Israel, fearing attacks from Syria or Iran.

All the missiles were launched from northern Syria, near Minakh, north of Aleppo, The Times quoted the Israeli officials as saying. One was sent about 250 miles to southernmost Syria, near the Jordanian border.

The one that broke up was fired southwest toward the Mediterranean, over the Turkish province of Hatay, the ancient Antioch, and shed debris over two villages there. No injuries were reported.

The assassination of Hariri, a former prime minister and vocal opponent of Syrian influence in Lebanon, sparked protests and international pressure that forced Damascus to withdraw its army from Lebanon after 29 years of political and military dominance.

The opposition has blamed Syria and its Lebanese allies in the security services for the assassination of Hariri, a charge Damascus has denied.

Israeli military sources tell The Times they see the development of the missiles as a gesture of defiance to the U.S. and United Nations after the humiliating withdrawal.

"This is really putting your fingers in the eyes of the Americans, saying, 'I'm not dancing to your flute,'" a senior Israeli military official told the newspaper. "The tests are probably needed for the missile project, but this is [Syrian president, Bashir al-Assad] taking a risk here and sending a message."