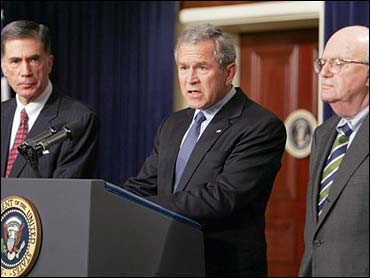 In a scathing report, a presidential commission said Thursday that America's spy agencies were "dead wrong" in most of their judgments about Iraq's weapons of mass destruction before the war and that the United States knows "disturbingly little" about nuclear threats posed by many of its most dangerous adversaries.

"Our collection agencies are often unable to gather intelligence on the very things we care the most about," the commission wrote.

At the top of its list of 74 recommendations, the commission urges President Bush to make sure John Negroponte, the new Director of National Intelligence, has the authority and backing to make much needed reforms in the U.S. intelligence community, reports CBS News White House Correspondent Mark Knoller.

The panel also said the FBI must be reformed to make maximum use of its intelligence capabilities by combining the bureau's counterterrorism and counterintelligence resources into a new office.

The report was the latest tabulation of intelligence shortfalls documented in a series of investigations since the terror attacks of Sept. 11, 2001 against the United States. Numerous investigations have concluded that spy agencies had serious intelligence failures before the attacks. Thursday's report concluded that the problem still has not been fixed, three years after al Qaeda struck America.

"The flaws we found in the intelligence community's Iraq performance are still all too common," it said.

Mr. Bush received the report in a meeting with commission members in the Cabinet Room where he was flanked by the panel's co-chairmen, Republican Laurence Silberman, a retired federal appeals court judge, and Democrat Charles Robb, a former senator from Virginia.

"The central conclusion is one which I share. America's intelligence community needs fundamental change," Mr. Bush said later in a news conference with the panel's co-chairmen.

Mr. Bush called the ideas in the report thoughtful and extremely significant. He said he had directed Fran Townsend, his White House-based homeland security adviser, to "review the commission's finding and to assure that concrete actions are taken."

After reading a prepared statement, the president then strode from the room, leaving Robb and Silberman behind to field questions on the report.

The chairmen agreed they had found no evidence that senior administration officials had sought to change the prewar intelligence in Iraq, possibly for political gain.

Robb said investigators examined every allegation "to see if there was any occasion where a member of the administration or anyone else had asked an analyst or anyone else associated with the intelligence community to change a position they were taking or whether they felt there was any undue influence. And we found absolutely no instance."

Robb was also particularly blunt when it came to turf wars within the intelligence bureaucracy. Negroponte "needs the full and unequivocal backing" of the president, he said, adding that there are "very distinguished and proud agencies whose culture will work against change."

The president will meet with his Cabinet this afternoon, intending to send the signal that he's serious about shaking up the way the intelligence agency does business, reports CBS News White House Correspondent Bill Plante.

The report does not accuse the administration of manipulating the intelligence. The commission noted that it wasn't authorized to investigate how policy-makers used this information.

"The daily intelligence briefings given to you before the Iraq war were flawed," it said. "Through attention-grabbing headlines and repetition of questionable data, these briefings overstated the case that Iraq was rebuilding its WMD programs."

In an implicit swipe at the Bush administration, Senate Minority Leader Harry Reid, D-Nev., said the report did not review how federal policymakers used the intelligence they were given.

"I believe it is essential that we hold both the intelligence agencies and senior policymakers accountable for their actions," Reid said.

The unclassified version does not go into significant detail on the intelligence community's assessment of countries such as Iran, North Korea, China and Russia because commissioners did not want to tip the U.S. hand about what is known.

In a classified portion, sources say the report charges U.S. Agencies have done a poor job of developing sources to get information on the nuclear programs of North Korea and Iran, Plante reports.

"Across the board, the intelligence community knows disturbingly little about the nuclear programs of many of the world's most dangerous actors," the report said. "In some cases it knows less now than it did five or 10 years ago."

Sen. Pat Roberts, chairman of the Senate Intelligence Committee, said he was pleased by the report and indicated that it concludes all inquiries into intelligence used to make the case for going to war with Iraq.

"I don't think there should be any doubt that we have now heard it all regarding prewar intelligence," the Kansas Republican said. "I think that it would be a monumental waste of time to re-plow this ground any further."

Rep. Ike Skelton of Missouri, the top Democrat on the House Armed Services Committee, said the failures were widespread.

"I don't think you can blame any one person, although the buck does stop at the top of every one of these agencies," Skelton said. "But quite honestly, the fault is spread out across all the agencies."

The commission was formed by Mr. Bush a year ago to look at why U.S. spy agencies mistakenly concluded that Iraq had stockpiles of weapons of mass destruction, one of the administration's main justifications for invading in March 2003.

"We conclude that the intelligence community was dead wrong in almost all of its prewar judgments about Iraq's weapons of mass destruction," the report said. "This was a major intelligence failure."

The main cause was the intelligence community's "inability to collect good information about Iraq's WMD programs, it said, and serious errors in analyzing what information it could gather and a failure to make clear just how much of its analysis was based on assumptions rather than good evidence.

"On a matter of this importance, we simply cannot afford failures of this magnitude," the report said.