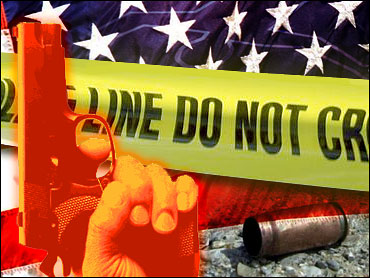 
The nation is on the verge of a crime epidemic, according to a report to be released this weekend at a conference of police chiefs. The report, compiled by the Police Executive Research Forum, says violent crime across America is "accelerating at an alarming pace."

Although the hard facts echo earlier statistics from the FBI, what is striking are the anecdotes from the police chiefs and mayors. They say a new "culture of violence," an "alarming element of viciousness," is now attached to many violent crimes.

In this culture, the report explains, "arguments over seemingly minor issues escalate to the retaliatory murder of additional people." In Trenton, N.J., for instance, an argument between two girls escalated into seven separate shootings over 24 hours. One chief said he's frustrated with homicides in his city, and noted that they seem to be committed without any apparent motive.

"They occur for no apparent rhyme or reason. They come up over the smallest issue," Richmond, Calif., Police Chief Chris Magnus is quoted as saying.

Some of the police chiefs blame the exacerbation of crime on a "thug mentality" that has been glamorized in music and movies. The sheriff of Las Vegas blames gangsta rap music and its effects on young people. An Arizona chief said some of our youth has become a "throw-away generation; nobody cares for them."

"It appears that today there is a lower valuation of human life," Louisville, Ky., Mayor Jerry Abramson told the authors of the report.

The murder numbers, as revealed in this report, are staggering. Orlando, Fla., had 30 murders from January to June 2006, compared with seven in the same period in 2005. The number of murders went up 60 percent in San Antonio, 27 percent in Boston and 26 percent in Houston.

Robberies are up almost 10 percent so far in 2006 from the same period in 2005, according to the report. Meanwhile, aggravated assault has increased by 25 percent in Atlanta and 14 percent in Boston.

Some cities have shown reduced crime, but they are few and far between. Kansas City has seen murder drop by almost 36 percent, while Denver has seen a 30 percent drop in robbery. In Norfolk, Va., murder decreased by more than 60 percent, from 28 in the first six months of 2005 to 11 in the same period in 2006.

The report finds that the combination of guns and youth is the major contributor to the surge in violent crime. Many police chiefs expressed alarm about the easy availability of guns and are worried about legislation pending in Congress that would restrict the federal ATF from sharing gun-tracing information with local police, making it harder to track down the guns used in crimes.

The statistics represent the first glance at crime so far this year. The report is to be issued at a meeting of more than 400 city officials that begins Sunday in Boston. The FBI's report on 2006 crime numbers, which incorporates crime numbers from more than 17,000 police agencies, won't come out until early 2007.

The Police Executive Research Forum is an organization of hundreds of police chiefs and city officials from around the country.