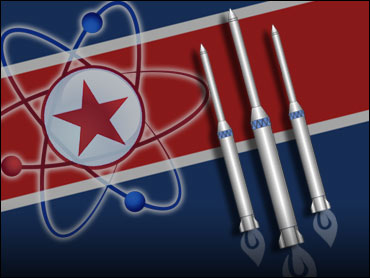 North Korea test-launched five short-range missiles Monday, reports said, in what analysts said was an attempt to improve its bargaining position ahead of possible talks with the United States.

North Korea has recently reached out to the U.S. and South Korea following months of tension over its nuclear and missile tests earlier this year. Leader Kim Jong Il told visiting Chinese Premier Wen Jiabao last week that his government might return to stalled six-nation negotiations on its nuclear program depending on the outcome of direct talks it seeks with the United States.

Washington has said it is considering holding talks with North Korea as part of efforts to restart the six-party negotiations.

The missile launches off North Korea's east coast were the first by the communist nation since it test-fired seven missiles in early July, South Korea's Yonhap news agency reported.

Yonhap, citing a South Korean official it did not identify, said the KN-02 surface-to-surface missiles were fired from mobile launch pads and had a range of up to 75 miles (120 kilometers). It said North Korea launched two missiles in the morning and three more in the afternoon.

the country's main spy agency — said they could not confirm the reports.

U.S. Secretary of State Hillary Rodham Clinton said in Belfast on Monday that American efforts to resume the nuclear talks with North Korea will proceed despite the new tests.

"Our goal remains the same," she told reporters after a meeting with Northern Irish business leaders. "Our consultations with our partners and our allies continues unabated. It is unaffected by the behavior of North Korea."

Clinton was to fly later to Moscow to meet with Russian leaders on a variety of issues, including nuclear reduction concerns.

South Korea's YTN television network carried a report similar to Yonhap's. It quoted an unidentified government source as saying North Korea had announced a no-sail zone in areas off the country's east and west coasts for Oct. 10-20 — an apparent indication the country could carry out more missile tests.

The reported launches appeared to be aimed at displaying North Korea's missile capability to bolster its negotiating hand ahead of talks with the U.S. and other countries to wrest more concessions, said Koh Yu-hwan, a North Korea expert at Seoul's Dongguk University.

Yang Moo-jin, a professor at Seoul's University of North Korean Studies, agreed and added that North Korea was unlikely to take more drastic steps such as its April long-range rocket test or May nuclear test.

The South proposed that officials of the two sides meet Wednesday to discuss how to prevent floods in a border river and that Red Cross officials meet separately on Friday to discuss reunions of families separated by the 1950-53 Korean War.

However, the Unification Ministry said South Korea has no plan to resume high-level talks with the North.

Yang, the analyst, said the missile tests were not related to South Korea's proposals, since the announcement of the no-sail zone showed the launches were planned in advance.

The Korean War ended in a cease-fire, not a peace treaty, which means that the two Koreas are still technically at war.