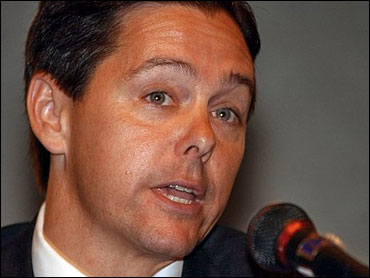 The money was sent through intermediaries to satisfy Reed's "political concerns," according to the Senate Indian Affairs Committee report (.pdf).

"Ralph Reed did not want to be paid directly by a tribe with gaming interests," Nell Rogers, a Mississippi Choctaw official, told the Senate panel. "It was our understanding that the structure was recommended by Jack Abramoff to accommodate Mr. Reed's political concerns."

Reed reportedly received more than $4 million from the Choctaws and the Louisiana Coushattas to direct campaigns against efforts to expand gambling.

The report said tax-cut advocate Grover Norquist served as a buffer between Abramoff's casino gambling money and Reed. Norquist's Americans for Tax Relief served as a conduit for the payments from the Choctaws to Reed's operation, while Norquist, a close White House ally, took a cut, the panel said.

Reed has not been charged with a crime and said in a statement Thursday that the investigation vindicates him.

"The report confirms that I have not been accused of any wrongdoing," he said, adding that he was assured he would not be paid with money derived from gambling.

"While I believed at the time that those assurances were sufficient, it is now clear with the benefit of hindsight that this is a piece of business I should have declined," Reed said.

Reed's association with Abramoff dates back at least to 1998, the report said, when Reed sent the lobbyist an e-mail message stating that was "done with electoral politics" and, "I need to start humping in corporate accounts! — I'm counting on you to help me with some contacts."

Reed faces a primary election on July 18 in his bid to become Georgia's first Republican lieutenant governor. But his campaign has been marred by his ties to Abramoff, the target of the committee's two-year investigation.

"By funneling millions through non-profits, Ralph thumbed his nose at the same tax laws the rest of us are forced to follow," said Cagle's spokesman, Brad Alexander.

Abramoff and Michael Scanlon, a former aide to then-Rep. Tom DeLay, have pleaded guilty and are cooperating with the Justice Department.

Two other congressional aides turned lobbyists, Tony Rudy and Neil Volz, also have pleaded guilty and are cooperating. A federal jury on Tuesday convicted former White House official David Safavian of covering up details of his relationship with Abramoff from committee investigators and others.

An ongoing federal investigation is looking into the actions of several members of Congress, their aides and former administration officials in connection with Abramoff.

The 373-page Senate report involves a wide cast of characters, including Rep. Bob Ney, R-Ohio. Ney told Senate investigators he made no effort to help an Abramoff client, despite extensive evidence to the contrary. Ney was not even familiar with the Tigua tribe of El Paso, Texas, the congressman told the committee.

Yet the report says Ney assured tribal leaders of his support for legislation on two occasions in 2002, once in person and once via telephone. The legislation would have allowed the tribe to reopen its shuttered casino.

The report says the "veracity" of Norton confidant Italia Federici is suspect. The conclusion is not a surprise, based on the tone of Senators John McCain and Byron Dorgan, the committees' chairman and vice chairman, at the public hearing where Federici testified last November.

The committee finds that Federici, whose Norton-founded political group received $500,000 from Abramoff-represented tribes, warrants further investigation "by the appropriate authorities." The committee suggests a quid pro quo between Abramoff and Federici – contributions to her groups for help getting access to top Interior officials. However, the report also says, "the extent to which Federici actually sought to influence Interior ... remains unclear."

Others in the investigation: