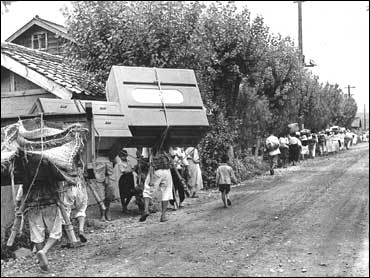 Six years after declaring the U.S. killing of Korean War refugees at No Gun Ri was "not deliberate," the Army has acknowledged it found but did not divulge that a high-level document said the U.S. military had a policy of shooting approaching civilians in South Korea.

The document, a letter from the U.S. ambassador in South Korea to the State Department in Washington, is dated the day in 1950 when U.S. troops began the No Gun Ri shootings, in which survivors say hundreds, mostly women and children, were killed.

Exclusion of the embassy letter from the Army's 2001 investigative report is the most significant among numerous omissions of documents and testimony pointing to a policy of firing on refugee groups — undisclosed evidence uncovered by Associated Press archival research and Freedom of Information Act requests.

South Korean petitioners say hundreds more refugees died later in 1950 as a result of the U.S. practice. The Seoul government is investigating one such large-scale killing, of refugees stranded on a beach, newly confirmed via U.S. archives.

On Sept. 1, 1950, about 2,000 South Korean refugees had gathered on the Pohang beach, 230 miles southeast of Seoul, after North Korean troops took
over their villages in an August 1950 offensive.

They believed they'd be safe because warships of their U.S. allies were just offshore, said Bang Il-jo, 68.

At 2:08 p.m. the U.S.S. DeHaven received the order from its Shore Fire Control Party to open fire, according to the ship's declassified war diary, found at the National Archives by the South Korean newspaper Busan Ilbo and authenticated by the AP.

The Navy crew questioned the order and was told U.S. Army intelligence said enemy troops were among the refugees and "the army desired that group be fired upon."

Within minutes, the DeHaven's 5-inch guns turned the unsuspecting refugee encampment, backed up against a steep hill, into a scene of carnage.

"The sea was a pool of blood," said Choi Il-chool, 75. "Dead bodies lay all over the place." Witnesses say 100 to 200 civilians were killed in the Navy shelling.

Survivor Choi said his older brother and sister-in-law were killed, his brother's body found with head, arms and legs blown off.

"This place was reddish-colored," Choi said, pointing to the curved gravel beach and wiping his eyes with a handkerchief.

"Some were swept away by waves," said Bang, leader of a survivors' group. He said his wounded father died of loss of blood, and his 7-year-old brother of severe abdominal wounds.

The diary noted 15 rounds fired over 11 minutes. The DeHaven ceased fire after hearing from an air spotter that "personnel consisted almost entirely of old men, women and children," the shipboard report said. Refugees had been desperately waving white undershirts at the plane.

"They knew we were refugees," Bang said. "There were no (North Korean) People's Army soldiers among us. How could they do that to us?"

Survivors speculated that an earlier observer plane may have seen the refugees scrambling under a sudden rain shower and viewed this as suspicious.

Without giving specifics, the ship's diary asserted there were "very light casualties ... due to fire having been directed to scatter and chase personnel."

Survivor Bang said most shells did fall just offshore, but their shrapnel cut through the throngs of refugees at the water's edge. He said the Americans offered no medical aid.

No Gun Ri survivors, who call the Army's 2001 investigation a "whitewash," are demanding a reopened investigation, compensation and a U.S. apology.

Harvard historian Sahr Conway-Lanz first disclosed the existence of Ambassador John H. Muccio's 1950 letter in a scholarly article and a 2006 book, "Collateral Damage." He uncovered the declassified document at the U.S. National Archives.

When asked last year, the Pentagon didn't address the central question of whether U.S. investigators had seen the document before issuing their No Gun Ri report. Ex-Army Secretary Louis Caldera suggested to The Associated Press that Army researchers may have missed it.

After South Korea asked for more information, however, the Pentagon acknowledged to the Seoul government that it examined Muccio's letter in 2000 but dismissed it. It did so because the letter "outlined a proposed policy," not an approved one, Army spokesman Paul Boyce argues in a recent e-mail to the AP.

But Muccio's message to Assistant Secretary of State Dean Rusk states unambiguously that "decisions made" at a high-level U.S.-South Korean meeting in Taegu, South Korea, on July 25, 1950, included a policy to shoot approaching refugees. The reason: American commanders feared that disguised North Korean enemy troops were infiltrating their lines via refugee groups.

"If refugees do appear from north of U.S. lines they will receive warning shots, and if they then persist in advancing they will be shot," the ambassador told Rusk, cautioning that these shootings might cause "repercussions in the United States." Deliberately attacking noncombatants is a war crime.

Told of the Pentagon's rationale for excluding the Muccio letter from its investigative report, No Gun Ri expert Yi Mahn-yol, retired head of Seoul's National Institute of Korean History, suggested the letter was suppressed because it was "disadvantageous" to the Pentagon's case.

"If they set it aside as nothing significant, we can say that it was an intentional exclusion," he said.

"The Muccio letter in plain English says, 'Decisions were made,'" the historian noted.

No Gun Ri survivors said U.S. soldiers first forced them from nearby villages on July 25, 1950, and then stopped them in front of U.S. lines the next day, when they were attacked without warning by aircraft as hundreds sat atop a railroad embankment near No Gun Ri, a village in central South Korea. Troops of the 7th U.S. Cavalry Regiment followed with ground fire as survivors took shelter in twin underpasses of a concrete railroad bridge.

The killings remained hidden from history until an AP report in 1999 cited a dozen ex-soldiers who corroborated the Korean survivors' accounts, prompting the Pentagon to open its inquiry after years of dismissing the allegations.

The Army veterans' estimates of dead ranged from under 100 to "hundreds." Korean survivors say they believe about 400 were killed. Korean authorities have certified the identities of at least 163 dead or missing.

No Gun Ri, where no evidence emerged of enemy infiltrators, was not the only such incident. As 1950 wore on, U.S. commanders repeatedly ordered refugees shot, according to declassified documents obtained by the AP.

One incident, on Sept. 1, 1950, has been confirmed by the declassified official diary of the USS DeHaven, which says that the Navy destroyer, at Army insistence, fired on a seaside refugee encampment at Pohang, South Korea. Survivors say 100 to 200 people were killed. South Korean officials announced in February they would investigate.

More than a dozen documents — in which high-ranking U.S. officers tell troops that refugees are "fair game," for example, and order them to "shoot all refugees coming across river" — were found by the AP in the investigators' own archived files after the 2001 inquiry. None of those documents was disclosed in the Army's 300-page public report.

South Koreans have filed reports with their government of more than 60 such episodes during the 1950-53 war.

Despite this, the Army's e-mail to the AP maintains, as did the 2001 report, "No policy purporting to authorize soldiers to shoot refugees was ever promulgated to soldiers in the field."

The 2001 official report instead focused on a single document issued the day the No Gun Ri shootings began, a Korea-wide Army order saying refugees should be stopped from crossing U.S. lines. That order did not say how they should be stopped, but retired Army Col. Robert M. Carroll, a lieutenant at No Gun Ri, said the meaning was clear.

"What do you do when you're told nobody comes through?" Carroll said in an AP interview before his death in 2004. If they didn't stop, he said, "we had to shoot them to hold them back."

Other ex-soldier eyewitnesses, including headquarters radiomen, told the AP that orders came down to the 7th Cavalry's 2nd Battalion command post, and were relayed through front-line companies at No Gun Ri, to open fire on the mass of village families, baggage and farm animals.

Such communications would have been recorded in the 7th Cavalry Regiment's journal, but that log is missing without explanation from the National Archives. Without disclosing this crucial gap, the Army's 2001 report asserted there were no such orders. It suggested soldiers shot the refugees in a panic, questioned estimates of hundreds of dead, and absolved the U.S. military of liability.

The Army report didn't disclose that veterans told Army investigators of "kill" orders, of seeing stacks of dead at No Gun Ri, and of earlier documentation of the killings. Such interview transcripts have been obtained via Freedom of Information Act requests. Examples: