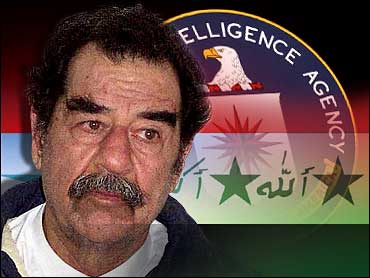 The revelation that Israel plotted to kill Saddam Hussein at the funeral of a beloved uncle resolved an enduring mystery and infuriated current military chiefs who worry loose talk is harming Israel's security.

"Operation Bramble Bush," the plot to assassinate Saddam with a missile attack, was shelved in 1992 after five elite commandos were killed training for the mission.

Rumors had circulated for years that the training accident was linked to plans to kill Saddam, but military censors suppressed publication until Tuesday, three days after U.S. forces captured the former Iraqi dictator.

Israeli security officials were furious about the revelation.

"There are things that are best left unsaid for security reasons, and should not be told to the whole world in an irresponsible fashion," military chief Lt. Gen. Moshe Yaalon said.

Israeli newspapers published details of the plot Tuesday, and officials involved in the planning — including the intelligence officer who tracked Saddam — spoke about it for the first time in radio and television interviews.

The Israeli plot was born after Iraq fired 39 Scud missiles at the Jewish state in the 1991 Gulf War. Bowing to U.S. pressure, the military did not retaliate, and officials believed killing Saddam would restore Israel's damaged credibility.

Nadav Zeevi, an Israeli intelligence officer at the time, told Israel Army Radio on Tuesday he was asked in the spring of 1992 to gather information on Saddam and propose a time and place for an attack. Zeevi said he knew Saddam would be a tough target because he moved often and was known to send doubles to appearances.

"We felt we needed something that was emotionally so important to him that he would attend personally," Zeevi said.

Zeevi said he learned that Saddam's maternal uncle and father-in-law, Khairallah Tulfah, was dying of diabetes, having lost both legs to the disease. Officials hatched a plan to kill Saddam when he attended what Israel believed would be Tulfah's impending funeral.

On Oct. 2, 1992, Zeevi brought the idea to Rabin and senior military officials. Rabin gave the go-ahead to continue intelligence gathering and to practice for an attack, Zeevi said.

The job was given to Sayeret Matkal, an elite commando unit that had carried out other daring operations, including the 1976 raid that freed Israeli hostages from a hijacked plane in Entebbe, Uganda.

The Israeli daily Yediot Ahronot said the plan called for commandos to be flown into Iraq and split into two groups. The advance unit would head to the Saddam family cemetery outside Tikrit, and a second group would deploy 13 kilometers (eight miles) away.

The front unit would watch the funeral from 135 meters (150 yards) away, and signal to the soldiers further back to fire a barrage of missiles on Saddam, Yediot reporter Ronen Bergman said. The custom-made missiles were named "Obelisk," the Maariv daily said.

After the assassination, the commandos were to be flown out of Iraq on a plane that would take off from a temporary airfield.

Zeevi said he had proposed something more modest — perhaps remote-controlled bombs that would be detonated as Saddam reached the cemetery.

"The generals, for their own reasons, pushed for more, for something with missiles and bang-bang and helicopters, something more like the Entebbe operation, something with a lot more action," Zeevi said.

On Nov. 5, 1992, the commandos staged a dress rehearsal in the Negev Desert. "It was basically a show for the generals," Zeevi said.

Ehud Barak, then army chief and later prime minister, was present along with other top military brass.

As part of the exercise, commandos were to fire a dummy missile at soldiers playing the roles of Saddam and his bodyguards. A live missile was used by mistake, and five soldiers were killed. Six were wounded.

For years, Barak was hounded by allegations — later proven false
that he fled, leaving behind wounded soldiers.

The plan to kill Saddam was shelved after the accident. Maariv said Saddam attended his uncle's funeral as predicted.