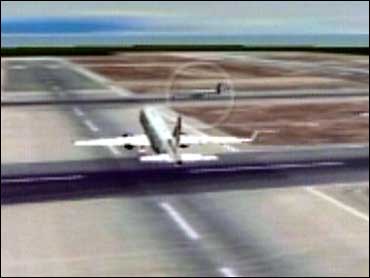 Congressional investigators said Wednesday that there is a "high risk" of a "catastrophic runway collision" at a U.S. airport and put the blame squarely on the administration, reports CBS News correspondent Bob Fuss.

The report said close calls have been increasing because safety oversight has been slipping, citing overworked air traffic controllers, many working six-day weeks, and high-tech radar systems that aren't working the way they are supposed to.

The investigators gave the Federal Aviation Administration credit for reducing runway safety incidents from a peak in 2001 but said "FAA's runway safety efforts subsequently waned" as the number of incidents settled at a lower level.

Then in fiscal 2007, which ended Sept. 30, the incidents spiked to 370, or 6.05 runway incursions per 1 million air traffic control operations, almost returning to 2001's 407 incursions and 6.1 rate. An incursion is any aircraft, vehicle or person that goes where it shouldn't be in space reserved for take-off or landing.

At this time, "no single office is taking charge of assessing the causes of runway safety problems and taking the steps needed to address those problems," the Government Accountability Office, Congress' investigative arm, said in a report requested by Rep. Jerry F. Costello, D-Ill., and Sen. Frank R. Lautenberg, D-N.J.

Transportation Secretary Mary Peters stepped into that leadership void in August by calling an industrywide brainstorming conference to produce ideas for quick action. In October, the FAA reported progress on steps recommended by the August conclave, particularly in speeding improved runway markings and pilot training. The GAO report approved of those moves but also recommended more leadership from the FAA, improved data collection and a reduction in overtime required of air traffic controllers.

"This report makes clear that the Bush administration is cutting corners and failing to put passenger safety first," Lautenberg said. "The FAA is taking too many chances and ignoring too many red flags."

Even though serious incursions, where a collision was narrowly averted, declined to a record low 24 in 2007 from 31 the year before, the report said they have remained high enough since the FAA took its eye off the ball to represent a high risk of catastrophe.

Since 1990, 63 people have died in six U.S. runway collisions. And the FAA's previous definition didn't classify some serious runway errors as incursions, including an Aug. 27, 2006, crash in Lexington, Ky., of a Comair jet that took off from a too-short runway, killing 49.

This year has seen dramatic near-misses. On Aug. 16, two commercial jets carrying 296 people came within 37 feet of colliding at Los Angeles International. A Delta Boeing 757 touched down in Fort Lauderdale, Fla., July 11 and had to take off immediately to avoid hitting a United Airbus A320 mistakenly on its runway. A Delta Boeing 737 landing at New York's LaGuardia airport July 5 narrowly missed a commuter jet mistakenly cleared to cross its runway.

The National Transportation Safety Board is investigating those, two others in Denver and one in San Francisco.

The GAO seconded the transportation safety board's April recommendation that the FAA reduce mandatory overtime for controllers. Since the FAA imposed a contract on the controllers union in 2006, experienced controllers have retired much faster than the agency predicted. The FAA also cut controller staff to respond to traffic pattern changes from airline mergers and bankruptcies. The union says the cuts are too deep and reduce safety; the FAA says air travel has never been safer.

Nevertheless, "agency officials indicated that they had no plan to mitigate the effects of air traffic controller fatigue," the GAO said.

The GAO found that radar the FAA installed at 34 of the busiest airports to monitor aircraft on the ground doesn't work well when needed most - during heavy rain or snow. FAA's more advanced ground-control radar, operational at only eight airports, issues false alerts of impending collisions - 41 from June 7, 2006, to May 16, 2007, at Hartsfield-Jackson Atlanta International.

FAA's Office of Runway Safety hasn't produced a national runway safety plan since 2002, went two years without a permanent director and had a 45 percent staff cut over the past four years, the GAO found.

Arguing for more and better data, the GAO urged the FAA to finish a three-year-old effort to set up a no-fault system for controllers to report safety problems. Industry experts told the investigators FAA definitions were so subjective that they knew of incidents FAA classified "as being less severe than they actually were."

Finally, the GAO urged the FAA to assume more responsibility from airports and airlines for safety in ramp areas, where planes park next to gates and 29 people have died between 2001 and 2006.