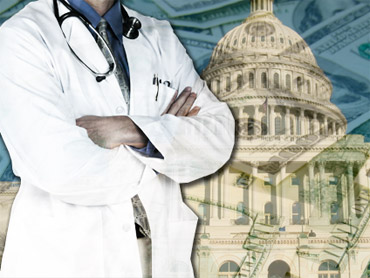 A report by economic experts at the Health and Human Services Department (HHS) said the health care remake will achieve Obama's aim of expanding health insurance - adding 34 million Americans to the coverage rolls.

But the analysis also found that the law falls short of the president's twin goal of controlling runaway costs, raising projected spending by about 1 percent over 10 years. That increase could get bigger, however, since the report also warned that Medicare cuts in the law may be unrealistic and unsustainable, forcing lawmakers to roll them back.

The mixed verdict for Obama's signature issue is the first comprehensive look by neutral experts.

In particular, the warnings about Medicare could become a major political liability for Democratic lawmakers in the midterm elections. The report projected that Medicare cuts could drive about 15 percent of hospitals and other institutional providers into the red, "possibly jeopardizing access" to care for seniors.

The report from Medicare's Office of the Actuary carried a disclaimer saying it does not represent the official position of the Obama administration. White House officials have repeatedly complained that such analyses have been too pessimistic and lowball the law's potential to achieve savings.

"The analysis by the independent Office of the Actuary reaffirms what the Congressional Budget Office has already said: the Affordable Care Act will cover more Americans and strengthen Medicare by cracking down on waste fraud and abuse, modernizing payment systems and improving benefits by providing free preventive services, supporting innovations that help control chronic disease and closing the prescription drug donut hole," HHS Secretary Kathleen Sebeilus said in a written statement."

"The Affordable Care Act will improve the health care system for all Americans and we will continue our work to quickly and carefully implement the new law," the statement concluded.

The report acknowledged that some of the cost-control measures in the bill - Medicare cuts, a tax on high-cost insurance and a commission to seek ongoing Medicare savings - could help reduce the rate of cost increases beyond 2020. But it held out little hope for progress in the first decade.

"During 2010-2019, however, these effects would be outweighed by the increased costs associated with the expansions of health insurance coverage," wrote Richard S. Foster, Medicare's chief actuary. "Also, the longer-term viability of the Medicare ... reductions is doubtful." Foster's office is responsible for long-range costs estimates.

"A trillion dollars gets spent, and it's no surprise - health care costs are going to go up," said Rep. Dave Camp, R-Mich., a leading Republican on health care issues. Camp added that he's concerned the Medicare cuts will undermine care for seniors.

Congress in the past has enacted deeper Medicare cuts without disrupting service, and HHS Secretary Kathleen Sebelius issued a statement that sought to highlight some positive findings for seniors. For example, the report concluded that Medicare monthly premiums would be lower than otherwise expected, due to the spending reductions.

"The Affordable Care Act will improve the health care system for all Americans and we will continue our work to quickly and carefully implement the new law," the statement said.

Passed by a divided Congress after a year of bitter partisan debate, the law would create new health insurance markets for individuals and small businesses. Starting in 2014, most Americans would be required to carry health insurance except in cases of financial hardship. Tax credits would help many middle-class households pay their premiums, while Medicaid would pick up more low-income people. Insurers would be required to accept all applicants, regardless of their health.

A separate Congressional Budget Office analysis, also released Thursday, estimated that 4 million households would be hit with tax penalties under the law for failing to get insurance.

The U.S. spends $2.5 trillion a year on health care, far more per person than any other developed nation, and for results that aren't clearly better when compared to more frugal countries. At the outset of the health care debate last year, Obama held out the hope that by bending the cost curve down, the U.S. could cover all its citizens for about what the nation would spend absent any reforms. The report found that the president's law missed the mark, although not by much. The overhaul will increase national health care spending by $311 billion from 2010-2019, or nine-tenths of 1 percent. To put that in perspective, total health care spending during the decade is estimated to surpass $35 trillion.

Administration officials argue the increase is a bargain price for guaranteeing coverage to 95 percent of Americans. They also point out that the law will decrease the federal deficit by $143 billion over the 10-year period, even if overall health care spending rises.

In addition to flagging the cuts to hospitals, nursing homes and other providers as potentially unsustainable, it projected that reductions in payments to private Medicare Advantage plans would trigger an exodus from the popular program. Enrollment would plummet by about 50 percent, as the plans reduce extra benefits that they currently offer. Seniors leaving the private plans would still have health insurance under traditional Medicare, but many might face higher out-of-pocket costs.

In another flashing yellow light, the report warned that a new voluntary long-term care insurance program created under the law faces "a very serious risk" of insolvency.