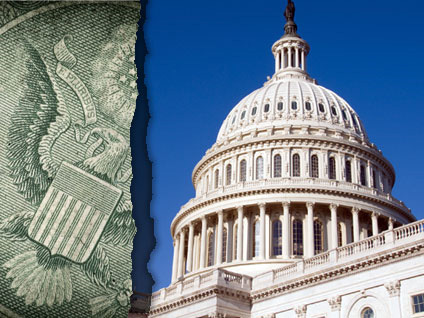 As Washington's use of private contractors grows, the government is paying those contractors billions more than it would pay their government workers to do the same job, according to a new study released Tuesday..

In an attempt to verify frequently made claims that the government can save money by outsourcing its work, the nonprofit Project On Government Oversight (POGO) compared the total annual compensation for federal (and private sector) employees with federal contractor billing rates.

That discrepancy is significant, given the federal government spends over $320 billion on service contracts each year, and about one-quarter of all discretionary spending goes to service contractors. According to POGO's report, the contractor workforce rose from an estimated 4.4 million in 1999 to 7.6 million in 2005 -- while the size of the federal employee workforce has remained relatively steady at about 2 million.

The POGO report stands as a rebuttal to reports such as the one released last year by the Heritage Foundation, a conservative think tank, which concluded that the average federal employee receives as much as 22 percent more in wages than an equally skilled private sector worker.

POGO's report contends that "the focus on comparing federal and private sector salaries needs to shift because they have nothing to do with what the government actually pays for services. Instead, the focus properly belongs on analyzing the full costs of paying contractors to perform federal services."

The American Federation of State County and Municipal Employees seized on the report to argue that the government should stop privatizing services.

"In the wake of the worst recession in our lifetime, federal, state and local governments should not be doling out billions of dollars to private contractors to perform services that can be done more efficiently and at lower cost by public workers," AFSCME President Gerald McEntee said in a statement.

In 2009, President Obama directed government agencies to review contracts to identify wasteful or inefficient efforts. However, Mr. Obama also signed a two-year federal pay freeze last year, making it more likely the government could turn to contractors. The 2012 Defense budget passed by the GOP-led House this year includes a "sense of Congress" provision that states that the Defense Department should only use in-house workers when the work involves inherently governmental functions.

POGO concludes that the government improve its data collection and reporting systems so it can better evaluate its private contracts. "The federal government has failed to determine how much money it saves or wastes by outsourcing, insourcing, or retaining services, and has no system for doing so," the report says.