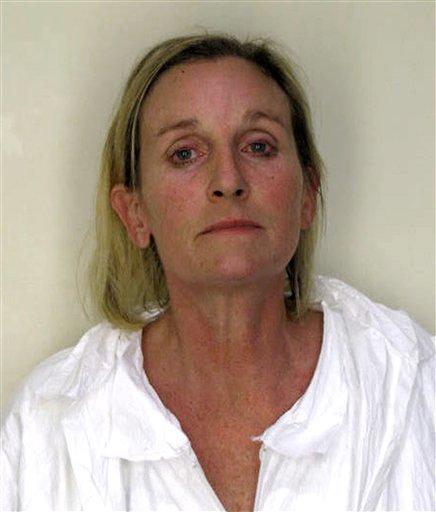 TAMPA, Fla. (AP) - A suburban Florida soccer mom showed signs of trouble in the months before she was accused of killing her two teenage children: Her 16-year-old daughter told authorities in November she had been hit by her mother on two occasions, and troopers investigating a car crash that same month thought the woman's glassy eyes and "mush mouth" indicated she had been using drugs.

However, state investigators found no evidence Julie Powers Schenecker, 50, had abused her children and determined the risk to the children was low, according to one of several reports released Monday.

Now, Schenecker is accused of shooting and killing the kids because they were talking back and being "mouthy." Investigators found her soaked in blood Friday on the back porch of the family's upscale home. Later that day, at a county jail, Schenecker shook uncontrollably, her eyes wide.

Investigators said 16-year-old Calyx and 13-year-old Beau had each been shot twice in the head a day earlier - Beau in the family's car on the way to soccer practice, Calyx in her room as she studied at her computer.

Both teens were killed with a .38-caliber pistol, which authorities say Schenecker bought five days earlier.

Schenecker was ordered held without bail Monday during a brief court hearing. She did not speak - though she did cry and hold a tissue, her hands bound by handcuffs. She is in the Hillsborough County Jail on two first-degree murder charges. A representative for the public defender's office declined to comment on the case.

Neither Schenecker nor her 48-year-old husband, Parker - an Army intelligence officer who was working in the Middle East when the shootings happened - had a criminal record. Parker Schenecker served in Munich from 1986 to 1990; his wife worked there from 1987 to 1992 as a Russian linguist involved in military intelligence, wrote an author identifying himself as Parker Schenecker on an online forum for military personnel.

The family moved to Tampa in 2008 when Parker Schenecker was transferred to U.S. Central Command headquarters, which oversees the Iraq and Afghanistan wars and is housed at MacDill Air Force Base.

Parker Schenecker has returned from his deployment, and funeral arrangements for his children are still being completed, his family said in a statement Monday.

"He is devoted first and foremost to honoring the lives and memory of his beautiful children, Calyx and Beau," said the statement, which did not mention his wife or the charges against her.

Friends and neighbors recalled a perfect family, whose Facebook photos showed a radiant foursome posing in Santa hats and decked in white near a pier. Calyx loved the Harry Potter series and excelled at cross-country running. Beau played soccer.

Calyx called police, telling officers her mother hit her as she drove home in the family car, according to a Department of Children and Families report. Julie Schenecker was in the passenger seat. The report said Calyx had been in counseling because of verbal abuse directed at her mother.

Calyx said her mom tried to hit her again while parked in the driveway, but she was able to hold the woman's hands away.

Julie Schenecker told officers that she and her daughter squabbled in the car and admitted to backhanding her daughter three times.

The teen also told officers that her mom had hit her about a month and a half before.

"(Calyx) said she was never hit like this before. She is usually disciplined by getting her privileges and her belongings taken away from her," the investigating officer wrote.

Officers didn't see any marks or bruises on the girl and closed the case without charging Schenecker.

The Florida Department of Children and Families also investigated the incidents - during one home visit shortly before Christmas, the children were wrapping gifts when the case worker arrived. The parents told a DCF investigator that the family was in counseling.

The parents also said that the family had no history of domestic violence, and that they used time-outs or took away privileges to punish the children.

Parker Schenecker told investigators it was the first time his wife had ever hit one of the children.

"He stated that he feels his daughter is very angry and at times can be very disrespectful," the report said. "He said he does often play peace maker in the home, but he does not mind."

Both teens said they felt safe in the home. Investigators closed the case when they found no evidence of abuse or neglect, saying in the report: "the overall risk to the children at this time is low."

On Nov. 8, Schenecker was in a car crash not far from her Tampa home. It happened shortly after noon, and the highway patrol report cited Schenecker for careless driving - she was going 70 in a 55-mph zone and plowed into a trailer hauling landscaping equipment. Both Schenecker and the other driver - who declined to comment on the crash Monday - were hurt.

Officers on the scene wrote that Schenecker "showed signs of drug impairment," including dilated pupils with no reaction to light and "mush-mouthed speech."

Other field sobriety tests weren't conducted because Schenecker was taken to the hospital. Another trooper went to the hospital to obtain a blood sample from Schenecker, but she had checked out by then.