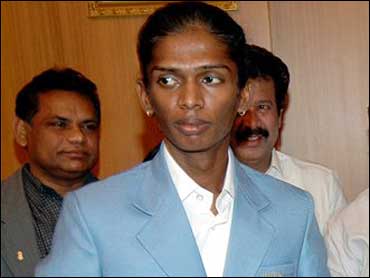 An Indian runner who won a silver medal in the women's 800-meter run at the Asian Games earlier this month has failed a gender test and is likely to be stripped of her medal, news reports said Monday.

Santhi Soudarajan, 25, was made to take the gender test in Doha, Qatar after her victory.

The test reports sent to the Indian Olympic Association on Sunday said she "does not possess the sexual characteristics of a woman," The Times of India reported. The test was administered by a medical commission set up by the games' organizers.

During an awards ceremony held in her native province Monday, Santhi said, "I do not want to talk about it," when asked about the failed tests.

There are no compulsory gender tests during events sanctioned by the International Association of Athletics Federation, but athletes can be asked to take a gender test. The medical evaluation panel usually includes a gynecologist, endocrinologist, psychologist, and an internal medicine specialist.

Dr. Manmohan Singh, chairman of the medical commission of the Indian Olympic Association told the Indian Express newspaper that the Olympic Council of Asia had been informed of the results of Soudarajan's gender test.

It was not unclear whether Santhi, who comes from a poor family, had undergone a sex change procedure in the past, reports The Times of India.

Sports officials in the athlete's home state of Tamil Nadu said that they have no information on her whereabouts.

"If the reports are true, then it is very sad and extremely disappointing," her coach, P. Nagarajan, told the Indian Express.