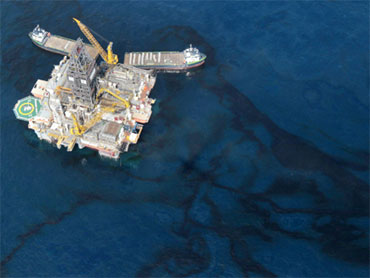 Within hours of the April 20 explosion aboard the Deepwater Horizon drilling rig, the U.S. Coast Guard saw the threat of a catastrophic spill, estimating that 8,000 barrels a day of crude could gush out of the well, according to a nonprofit group that reviewed Coast Guard logs.

Estimates of the flow have ranged wildly. During the first month after the spill, BP estimated the leak at about 5,000 barrels a day, and federal estimates currently put the gush somewhere between 12,000 and 19,000 barrels a day.

The logs, obtained by the Center for Public Integrity, provide a detailed account of the early days of the BP disaster and identify events that the nonprofit says were omitted from the White House's official timeline of the crisis.

According to the documents, Coast Guard officials first saw signs of oil appearing on the water April 21 - the day after the explosion.

The Center, who shared the logs with the New York Times, said that officials also learned within the first day of the disaster that the blowout preventer - an oil rig safety device that is supposed to cut off a well in case of an accident - was not functioning and could not be manually repaired by remote underwater robots.

The White House first acknowledged the leak on April 24, when undersea robots discovered a plume of oil coming from the riser on the sea floor, according to the Center.

The Center received the logs from Rep. Darrell Issa, R-Calif.

"Americans have a right to be outraged by this spill, by top government officials caught off-guard, and by the facts the White House omitted in explaining what it knew and when it knew it," Issa said.

White House spokesman Nick Shapiro did not respond to the Center for a request for comment. However, Shapiro told The New York Times that the White House timeline included a disclaimer at the bottom saying it was not meant to be comprehensive.