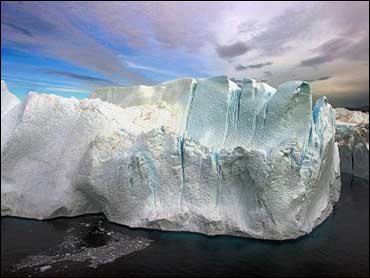 Next week, an international panel of top climate scientists, including Americans, will issue a long-awaited report on climate change.

The long-awaited report to be published next week puts hard scientific fact behind the cliché images of global warming. A final draft, obtained by CBS News, contains the strongest language yet on how fast the world is heating up and who to blame.

The study traces global temperatures and so-called greenhouse gases going back thousands of years. It shows a gradual variation until the Industrial Revolution begins, when fossil fuel use skyrockets, as do temperatures, CBS News correspondent Mark Phillips reports.

"As we add to those gasses, we are just doing the same thing as putting another blanket on our bed at night," said Sir David King, British chief government scientific adviser. "The consequences are that you get warmer, and that is as simple as it is."

The panel now feels the science is there to make confident predictions that are likely or almost certain. They include:

"We are living in a schizophrenic world," said Klaus Schwab, executive director and founder of the World Economic Forum. "On the one hand, we have an economy which is doing very well and even the prospects for this year are very promising.

"On the other hand we have so many underlying imbalances, inconsistencies, weaknesses and fragilities," he told reporters. "So what we want to do with this meeting is to highlight the need to address those global challenges."

The annual meeting is also to focus on securing global energy supplies, including the development of more alternative fuels, particularly in light of oil prices that surged in 2006 before settling in recent weeks, supply disruptions from Russia and attacks on oil pipelines in Iraq and Nigeria.

During his State of the Union address Tuesday night, Mr. Bush called for American imports to be cut by the equivalent of 75 percent of the oil coming from the Middle East.

His prescription, as always, relied primarily on market incentives and technological advances, not government mandates.

There will be 17 sessions focusing on climate change, featuring topics to help companies and governments navigate the legalities of implementing policy changes aimed at curbing emissions and pollution and how to make going green profitable.

Among the people scheduled to talk about the issues are McCain, Zhang Xiaoqiang, vice chairman of China's National Development and Reform Commission; and Montek Ahluwalia, deputy chairman of India's planning commission.

A survey of participants by pollster Gallup International found that this year twice as many attendees as last year thought that environmental protection should be a priority for world leaders.

"The companies represented at the annual meeting have a combined turnover of about $10 trillion — nearly a quarter of global GDP — so catalyzing their deeper engagement in this issue can only be a good thing for all of us," said Dominic Waughray, head of environmental initiatives for the WEF.

Merkel, whose country is president of the European Union and the Group of Eight, focused on climate change in her address.

Another key issue is the ongoing conflict between Israel and the Palestinians and securing the future of Iraq. Israeli Foreign Minister Tzipi Livni and Palestinian President Mahmoud Abbas are among those attending the event, while Jordanian King Abdullah II will speak about the future of the Middle East.

Arab League Secretary-General Amr Moussa told the AP that it was unlikely any of those problems would be solved.

"Don't ask (for) too much ...that we are going to solve the problem or sign documents here in Davos," he said.

Security was tight around the city, with Swiss police, the military and private contractors cordoning off access to the Congress Center, the meeting's main venue.

Protests by people critical of globalization and who claim that corporate and big business favors profits over people are expected to be minimal. Critics have planned an action day for Jan. 27 in Davos and a national demonstration in the city of Basel the same day.