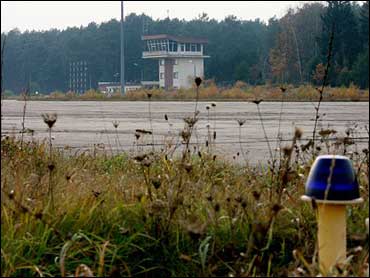 The CIA ran secret prisons in Poland and Romania from 2003 to 2005 to interrogate detainees in its war on terror, Council of Europe investigator Dick Marty said in a report released Friday.

"While it is likely that very few people in the countries concerned, including in the governments themselves, knew of the existence of the centers, we have sufficient grounds to declare that the highest state authorities were aware of the CIA's illegal activities on their territories," Marty said.

He also accused two other countries of obstructing his probe into alleged secret detentions by the CIA.

"Some European governments have obstructed the search for the truth and are continuing to do so by invoking the concept of 'state secrets,'" Marty said. "This criticism applies to Germany and Italy, in particular."

Sheikh Mohammed is the self-proclaimed mastermind of the Sept. 11 attacks and Abu Zubaydah is a suspected senior al Qaeda operative.

Meanwhile, the first trial involving the CIA's extraordinary rendition program opened in a Milan courtroom Friday morning, reports CBS News correspondent Sabina Castelfranco. All 26 American defendants were absent. They are accused of kidnapping an Egyptian terrorist suspect Osama Moustafa Hassan Nasr, also known as Abu Omar, from the streets of Milan in February 2003. Abu Omar was transferred to an Egyptian prison where he is believed to have been tortured. He has now been released.

Also indicted in the case are seven Italians including the former chief of Italy's military intelligence agency.

The trial may be postponed until the fall, however.

Marty's report said collaboration by U.S. allies was critical to the secret detention program, which took place in the framework of NATO's security policy.

"The secret detention facilities in Europe were run directly and exclusively by the CIA," said the report.

Poland and Romania hosted the prisons under a special post-Sept. 11 CIA program to "kill, capture and detain" so-called high value terrorist suspects, wrote Marty, a Swiss senator investigating the alleged role of Council of Europe states in the CIA program.

Evidence of secret flights — at least 10 flights to Poland between 2002 and 2005 — show the pivotal role played by Poland and Romania as drop-off points, the report says.

"There is now enough evidence to state that secret detention facilities run by the CIA did exist in Europe from 2003 to 2005, in particular in Poland and Romania," the report said.

Marty did not name sources from his information, but said that the report was based on discussions with people "who had worked or still worked for the relevant authorities, in particular intelligence agencies."

"We have never based our conclusions on single statements and we have only used information that is confirmed by other, totally independent sources," the report said, adding that where possible information was "cross-checked" in the European countries in question, in the United States or through documents or data.

"Clearly, our individual sources were only willing to talk to us on the condition of absolute anonymity," the report said.

Last year, Marty accused 14 European nations — from Ireland and Germany to Romania — of colluding with U.S. intelligence in a web of rights abuses to help the CIA spirit terror suspects to illegal detention facilities.

Marty said evidence suggested that CIA-linked planes carrying terror suspects had landed at airports in Timisoara, Romania, and Szymany, Poland, and likely dropped off detainees there.

His second report confirms Szymany as a drop-off point in Poland, where at least 10 flights — six coming from Kabul, Afghanistan — landing there.

The report lists eight of the CIA flights, with one each originating in Dubai, in the United Arab Emirates and Rabat, Morocco, and says it can be "demonstrated" that the majority of them were "deliberately disguised."

A BBC investigation last year revealed that a well-known CIA Gulfstream plane, the N379P, had made several landings at Szymany airport in northern Poland in 2003. The airport is not far from a Polish intelligence base.