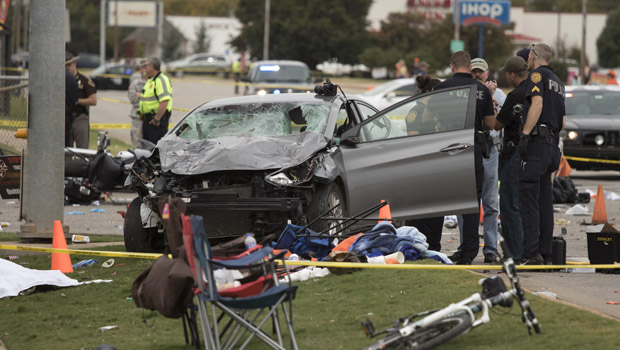 STILLWATER, Okla. - A woman arrested on a DUI charge crashed into a crowd of spectators Saturday morning during the Oklahoma State University homecoming parade, killing four people and injuring more than three dozen others, police said.

Stillwater police Capt. Kyle Gibbs said the woman's sedan plowed into an unoccupied motorcycle of an officer who was working security at the parade, then into the crowd. The driver of the sedan was taken into custody on a driving under the influence charge, Gibbs said.

Three adults died at the scene and a fourth, a two-year-old child, died later at a hospital. Late Saturday night, Gibbs said a total of 44 people were injured in the crash Saturday morning, including eight who were airlifted to hospitals with critical injuries, reports CBS affiliate KOTV. Another nine people were seriously injured, according to police.

Police said Adacia Chambers, 25, was taken into custody on the DUI charge. The Stillwater resident was being held at the city jail.

"We treat these like we would any homicide investigation," Gibbs said. "It'll probably take several days to get additional information as to the cause of the accident"

"We are heartbroken at this tragedy and our thoughts and prayers are with the families of those who died and are injured," said Stillwater Mayor Gina Noble.

According to her fiancé, Jesse Gaylord, Chambers rarely drank alcohol. Gaylord told CBS News Chambers left work at a frozen custard shop about a half-mile from the scene early, but he isn't sure why.

"She's a really nice girl. Hasn't shown anything, I mean... I got her up this morning and gave her a hug and kiss and she made it to work," Gaylord said.

Chambers' father, Floyd Chambers of Oologah, told The Oklahoman newspaper he couldn't believe his daughter was involved and said she was not an alcoholic. He described his daughter as "timid" and said she had attended homecoming festivities Friday night with family but that her boyfriend had told him she was home by 10 p.m.

"This is just not who she is. They're going to paint her into a horrible person but this is not (her)," Floyd Chambers told the paper.

A woman who answered a call to a phone number listed for Floyd Chambers told The Associated Press no one was available to talk.

At Boone Pickens Stadium Saturday afternoon, the flag was lowered to half-staff before kickoff of the No. 14 Cowboys' homecoming game against Kansas. Officials had considered postponing the game but decided to play it as scheduled and honor the victims.

After running out onto the field before the game, most of the Oklahoma State players knelt in prayer by the OSU sideline during a moment of silence. The Cowboys went on to win the game, 58-10.

Dave Kapple of Houston told the Stillwater News Press that he and his son were about 10 feet away when they saw the vehicle barreling into the crowd.

"We heard somebody scream, 'Look out!.' (The driver) plowed through a police motorcycle, and then a crowd of people," Kapple said. "People were flying everywhere."

Konda Walker, from Anchorage, Alaska, was attending the festivities ahead of the homecoming game.

"At first we thought it was part of the show," Walker told the News Press. "People were flying 30 feet into the air like rag dolls."

The university released a statement Saturday afternoon saying it was "devastated" and expressing throught and prayers for those killed and injured.

"We are shocked and heartbroken by this horrible tragedy," the statement said. "The Oklahoma State University Homecoming parade is the most wholesome of events and to have it marred in such a way is incomprehensible. We appreciate the rapid response and work of all emergency personnel. The OSU family will remember those affected by this tragedy."

It's not the first tragedy to strike events connected to Oklahoma State spots programs. Ten people, including two OSU men's basketball players, were killed in a 2001 plane crash while returning from a game in Colorado. And Oklahoma State women's basketball coach Kurt Budke and assistant Miranda Serna were among four killed in a plane crash in Arkansas in 2011 while on a recruiting trip.

"The families, I know, and these victims will never be able to understand this, nor will we," Hargis said. "But the Cowboy family pulls together, unfortunately we've had to do it before and were going to do it again."