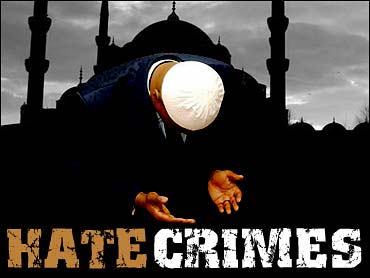 A new report finds that the number of reported bias crimes and civil rights violations against Muslims in the United States soared to its highest level last year since the period immediately after the Sept. 11, 2001, terrorist attacks.

The Washington-based Council on American-Islamic Relations, which did the study, attributed the increase to lingering animosity toward Muslims and a growing use of anti-Muslim rhetoric by some political, religious and media figures.

Notable bias or discrimination cases cited in the report include the barring of singer Cat Stevens and Islamic scholar Tariq Ramadan from entering the United States and the arrest of a Muslim lawyer from Oregon jailed as a "material witness" in the terrorist bombing of Madrid trains based on a fingerprint that turned out to belong to someone else.

The study, involving cases that were reported to the council by both individuals and organizations, was being released Wednesday at a news conference in Washington. A copy was obtained in advance by The Associated Press.

"We believe the disturbing rise in anti-Muslim hate crimes and in the total number of civil rights cases, both of which will be outlined in our news conference, can be attributed at least in part to rising Islamophobic rhetoric in American society," said Arsalan Iftikhar, the council's legal director.

The council counted 1,522 incidents in which Muslims reported their civil rights had been violated in 2004, a 49 percent increase over 2003. Another 141 incidents of confirmed or suspected bias crimes were committed against Muslims, a 52 percent rise.

The most recent FBI report on hate crimes, issued in November and covering 2003, found that anti-Islamic crimes remained about same level — 149 — as the year before. The FBI report was drawn from information submitted by more than 11,900 law enforcement agencies nationwide.

Some Muslim leaders were surprised by the council's findings.

"I thought we were through with the high point after 9/11," said Yaser El-Menshawy, chairman of New Jersey's council of mosques. "My gut feeling is it may be a combination of the war in Iraq and mounting casualties, and that we're getting better at collecting this kind of data."