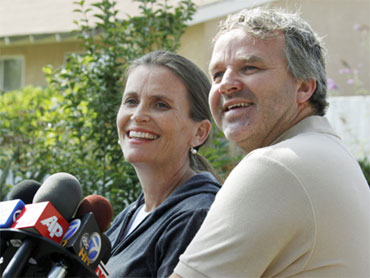 Laurence Sunderland - who told "The Early Show" Saturday that he'd "absolutely" let 16-year-old Abby attempt her dangerous feat again - is "broke" and has been working with a production company on a show called "Adventures in Sunderland," the Post reported.

Abby Sunderland was rescued in the southern Indian Ocean by a French fishing vessel Saturday, two days after her yacht was damaged in a storm and she sent out a distress signal, spurring a massive rescue effort.

The Thousand Oaks, Calif., teenager was trying to become the youngest person ever to circumnavigate the globe alone when she ran into trouble in heavy seas Thursday. Her mast collapsed, crippling her boat and her ability to communicate via satellite, so she set off a distress signal.

"Crazy is the word that really describes everything that has happened best," Abby Sunderland wrote Saturday morning in a blog post from "a great big fishing boat headed I am not exactly sure where."

"The long and the short of it is, well, one long wave, and one short mast," she wrote.

Her brother, Zac Sunderland, held the record Abby was seeking for a little more than a month last year until Mike Perham, of Great Britain, captured it with a journey of his own. Then last month, the mark moved again when Australian Jessica Watson, 16, wrapped up her own 'round-the-world adventure.

The Sunderlands have faced criticism for months for allowing Abby to undertake the high-risk journey.

Veteran sailors questioned the wisdom of sending a teenager off alone in a small boat, knowing it would be tossed about for 30 or more hours at a time by the giant waves that rake the Southern Hemisphere's oceans this time of year.

Those criticisms preceded the news that Laurence Sunderland had let cameras into his home to chronicle his family's daredevil feats.
"We thought it might be a good idea if it was encouraging to kids to get out there and do things," Sunderland told the Post.