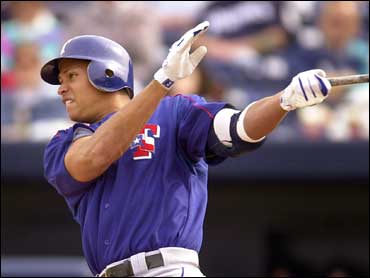 Alex Rodriguez tested positive for steroids in his MVP season of 2003, according to a report by Sports Illustrated.

Rodriguez declined to discuss the tests when approached by SI on Thursday at a gym in Miami, where he lives in the offseason.

"You'll have to talk to the union," he told a reporter. Calls from SI to union head Donald Fehr were not returned.

An e-mail from The Associated Press to Rodriguez's agent, Scott Boras, was not immediately returned. The Yankees and Fehr had no comment.

In 2003, the year the tests took place, Major League Baseball and the Players Association agreed to conduct steroid tests under the condition that the results remained strictly confidential.

Their identities were supposed to remain anonymous.

But the following year, federal authorities armed with a search warrant seized records from the two companies involved in the testing. Federal officials have since that time had the ability to see the results and see which players tested positive.

The seizure in April 2004 was part of the government's investigation into 10 baseball players linked to the BALCO scandal, the magazine reported. Rodriguez has not been connected to BALCO.

Rodriguez played for the Rangers in 2003, when he won the American league home run title with 47 home runs, as well as the Most Valuable Player Award. He was traded to the Yankees in 2004. He is drawing a major league-high $27 million salary after signing a record $275 million, 10-year contract with New York in 2007.

In a December 2007 interview with "60 Minutes," three days after George Mitchell's report on drugs in the sport was released, Rodriguez denied using peformance-enhancing drugs.

"I've never felt overmatched on the baseball field. ... I felt that if I did my, my work as I've done since I was, you know, a rookie back in Seattle, I didn't have a problem competing at any level," he said.

Primobolan, also known as methenolone, is an injected or orally administered drug. It improves strength and maintains lean muscle with minimal bulk development and few side effects. Bonds tested positive three times for methenolone, according to court documents unsealed by a federal judge Wednesday.

Primobolan is not an approved prescription drug in the United States. Testosterone can be taken legally with a prescription.

The revelations come at a time when baseball's focus on drugs has concerned Barry Bonds and the legal maneuvering leading to the start of his trial March 2. The government is trying to prove the home run king lied when he told a grand jury he never knowingly took performance-enhancing drugs.

Rodriguez until now has had an off-season dominated by talk of disclosures in Joe Torre's recently released book. The former Yankee manager wrote of the pressure A-Rod puts on himself and the third baseman's need to command the stage. Torre said some in the Yankees clubhouse referred to Rodriguez as "A-Fraud," although Torre made light of that during interviews promoting his book, "The Yankee Years."

Baseball's drug policy prohibited the use of steroids without a valid prescription since 1991, but there were no penalties for a positive test in 2003.

As part of an agreement with the players' union, the testing in 2003 was conducted to determine if it was necessary to impose mandatory random drug testing across the major leagues in 2004.