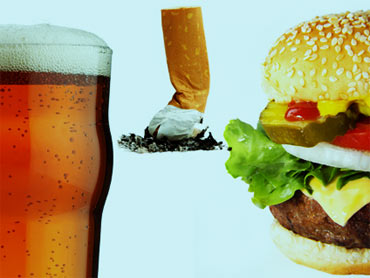 About 40 percent of cancers could be prevented if people stopped smoking and overeating, limited their alcohol, exercised regularly and got vaccines targeting cancer-causing infections, experts say.

To mark World Cancer day on Thursday, officials at the International Union Against Cancer released a report focused on steps that governments and the public can take to avoid the disease.

According to the World Health Organization, cancer is responsible for one out of every eight deaths worldwide - more than AIDS, tuberculosis and malaria combined. WHO warned that without major changes, global cancer deaths will jump from about 7.6 million this year to 17 million by 2030.

In the report from the International Union Against Cancer, experts said about 21 percent of all cancers are due to infections like the human papillomavirus, or HPV, which causes cervical cancer, and hepatitis infections that cause stomach and liver cancer.

While the vaccines to prevent these cancers are widely available in western countries, they are almost nonexistent in the developing world. Nearly 80 percent of the world's cervical cancer deaths are in poor countries, according to the agency.

"Policymakers around the world have the opportunity and obligation to use these vaccines to save people's lives and educate their communities towards lifestyle choices and control measures that reduce their risk of cancer," Cary Adams, chief executive of the International Union Against Cancer, said in a statement.

In Western nations, experts said many of the top cancers - like those in the lungs, breasts and colon - might be avoided if people changed their lifestyle habits. To reduce their risk, the agency recommended that people stop smoking, limit their alcohol consumption, avoid too much sun, and maintain a healthy weight through diet and exercise.