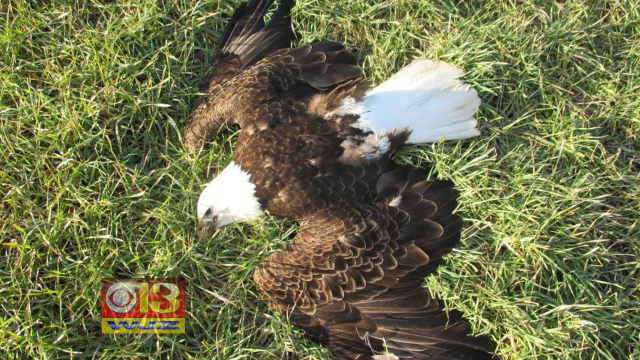 FEDERALSBURG, Md. - Thirteen bald eagles found dead on a Maryland farm in February 2016 died by poisoning, according to a report obtained by Annapolis radio station WNAV.

In March 2016, officials had said the animals did not die of natural causes, but no further explanation was made available. WNAV reports that they received necropsy reports on the animals from the U.S. Fish and Wildlife Service (USFWS) last week which indicates the bald eagles died from poisoning by carbofuran, a toxic pesticide.

According to the station, carbofuran was banned by the Environmental Protection Agency in 2009 and that decision was upheld by the Supreme Court in 2011.

WNAV cited Cornell University's Pesticide Management Education Program's description of carbofuran's effects on birds: "Carbofuran is highly toxic to birds. One granule is sufficient to kill a small bird. Bird kills have occurred when birds ingested carbofuran granules, which resemble grain seeds in size and shape, or when predatory or scavenging birds have ingested small birds or mammals which had eaten carbofuran pellets."

The station shared the USFWS report with the Washington Post which reports that authorities have yet to determine who poisoned the bald eagles.