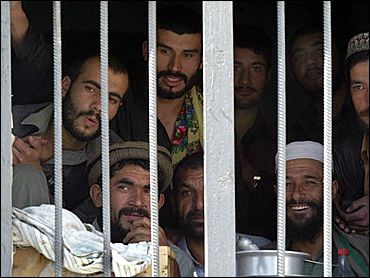 At least 108 people have died in American custody in Iraq and Afghanistan, most of them violently, according to government data provided to The Associated Press. Roughly a quarter of those deaths have been investigated as possible abuse by U.S. personnel.

The figure, far higher than any previously disclosed, includes cases investigated by the Army, Navy, CIA and Justice Department. Some 65,000 prisoners have been taken during the U.S.-led wars in Iraq and Afghanistan, although most have been freed.

The Pentagon has never provided comprehensive information on how many prisoners taken during the U.S. wars in Iraq and Afghanistan have died, and the 108 figure is based on information supplied by Army, Navy and other government officials. It includes deaths attributed to natural causes.

To human rights groups, the deaths form a clear pattern.

"Despite the military's own reports of deaths and abuses of detainees in U.S. custody, it is astonishing that our government can still pretend that what is happening is the work of a few rogue soldiers," said ACLU Executive Director Anthony D. Romero. "No one at the highest levels of our government has yet been held accountable for the torture and abuse, and that is unacceptable."

To the Pentagon, each death is a distinct case, meriting an investigation but not attributable to any single faulty military policy. Pentagon officials point to a number of military investigations which found that no policy condoned abuse.

Defense Department spokesman Lt. Col. John Skinner said the military has taken steps to reduce the chance of violent uprisings at its prisons and the use of excessive force by soldiers, and also has improved the health care available to prisoners.

"The military has dramatically improved detention operations, everything from increased oversight and improved facilities to expanded training and the availability of state-of-the-art medical care," he said in a statement.