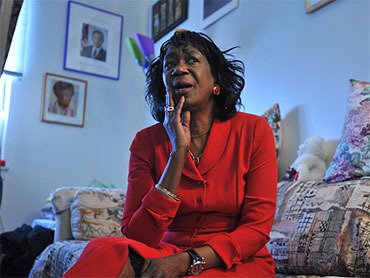 Congressman Steve King, an Iowa Republican, today requested that President Obama's aunt, Zeituni Onyango, testify before the House Subcommittee on Immigration, Citizenship, Refugees, Border Security and International Law in order to address "the public perception that favoritism played a role in the grant of asylum to Ms. Onyango."

In a letter to the chair of the subcommittee, Rep. Zoe Lofgren, King writes that "[i]n order to better determine whether favoritism played a role - especially because Ms. Onyango had been earlier turned down for asylum and ordered deported in 2004 before her nephew became president - the Subcommittee needs to hear from Ms. Onyango herself."

"While I understand that asylum proceedings are generally confidential, Margaret Wong, Ms. Onyango's attorney, has clearly courted press attention regarding this matter," he continues. "In fact, I assume that the press learned that Ms. Onyango received asylum because of comments to the media made by Ms. Wong. Therefore, Ms. Onyango has made herself a public figure and should have no hesitation about appearing before the Subcommittee. Further, in order to facilitate Ms. Onyango's appearance before the Subcommittee, I request that you and Chairman Conyers authorize the Committee to reimburse her travel expenses."

Onyango was granted asylum last month; the half-sister of Mr. Obama's late father, she moved from Kenya to the United States in 2000.

Her 2002 application for asylum, which was tied to violence in Kenya, was rejected two years after she filed it. Despite that result, Onyango continued living in public housing in Boston.

When it was reported in 2008 that Onyango was possibly in the country illegally, Mr. Obama said he had no knowledge of her status. She testified on her own behalf in U.S. Immigration Court in Boston before being granted asylum this year.

The subcommittee hearing is set to take place Thursday morning.