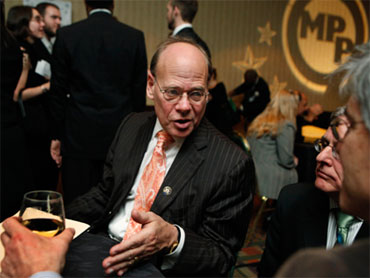 After all, sharing a stage with Cheech and Chong and calling for loosening drug laws isn't usually in the campaign playbook of a sitting congressman.

Cohen, a two-term Democrat from Memphis, didn't seem to care Wednesday night as he headlined the pro-legalization Marijuana Policy Project's 15th annual gala, where the famed stoner comedy duo of Cheech Marin and Tommy Chong won a lifetime "trailblazer" award for helping push marijuana use into the mainstream.

"Most of my colleagues didn't want to be here and aren't here. Maybe that says something about my political judgment," Cohen joked to a few hundred people at the $250-per-plate dinner, where sponsors displayed pot "vaporizers" and hemp clothing.

A longtime advocate for legalizing medical marijuana for people with chronic illnesses, Cohen also argues that the government is wasting billions of dollars and wrecking people's lives by cracking down on petty drug offenses.

He said his own campaign polls have shown nearly 3-1 support for medical marijuana.

Cohen threw in some marketing advice for the crowd, which also heard from former Republican Gov. Gary Johnson of New Mexico and actor Larry Hagman.

"If you renamed marijuana something like Jack Daniel's or Jim Beam, it'd be a lot more popular," Cohen said. "You need to get a good name for it."

His suggestions were well-received - Cohen got nearly as loud an ovation as Cheech and Chong.

Thirteen states have legalized medical marijuana, and New Jersey is poised to become the 14th after the state's legislature passed a bill this week.

The Marijuana Policy Project is the chief lobbying arm of the legalization movement.