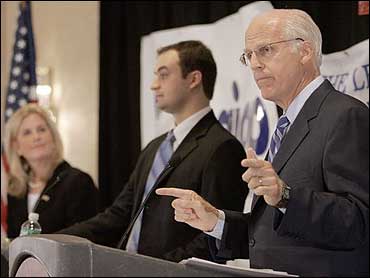 Rep. Chris Shays, who is facing a tough challenge from an anti-war Democrat, on Wednesday called for Defense Secretary Donald H. Rumsfeld to resign — a rare demand from a longtime Republican.

The Connecticut lawmaker also accused officials at the Defense Department of withholding information about the Iraq war from Congress.

"I am losing faith in how we are fighting this war," Shays, a longtime supporter of the conflict, said in an interview. "I believe we have to motivate the Iraqis to do more."

Shays, who was elected in 1987, said defense officials stopped cooperating with his congressional subcommittee after Shays proposed setting a timeline for troop withdrawals. Shays, who had previously opposed such a timeline, offered the plan in August following his 14th trip to Iraq since the war began.

Rumsfeld "simply is refusing to cooperate with a committee that oversees the Department of Defense," Shays said. "To me he has crossed the line."

"I think Donald Rumsfeld needs to step down," said Shays, who is chairman of the House Government Reform subcommittee on national security, emerging threats and international relations.

The Pentagon had no comment and referred to Rumsfeld's recent remarks. Asked on a flight to Nicaragua earlier this week whether he would resign, Rumsfeld responded, "No, no, no." He said he had spoken to President Bush and he had voiced his support.

Shays is a moderate Republican who has voted against the party rank-and-file on a number of issues, including the environment. He also supports abortion rights and gun control.

Frustration among some in the GOP with the administration's handling of the war is not limited to Congress. During an appearance in Minnesota on Tuesday, former Secretary of State Colin Powell said, "stay the course isn't a good enough answer, because to stay the course you have to have a finish line."

Rep. Walter Jones, R-N.C., who has Camp Lejune in his district, said he has repeatedly called for Rumsfeld to resign.

"I have felt this way for quite a while. . . . He reminds me so much of (Defense Secretary Robert) McNamara in the Vietnam War. He is arrogant and will not admit a mistake."

Shays is in one of the most competitive House races this year and his comments come just five weeks before the midterm elections. His opponent, Democrat Diane Farrell, has opposed the war and advocates an exit strategy for U.S. troops. Farrell lost to Shays by 4 percentage points two years ago.

Farrell's campaign pointed out that she has been calling for Rumsfeld's resignation for months and said this is just the latest change in Shays' position.

"He has supported the war from Day One," said Farrell campaign spokeswoman Jan Spiegel. "He has voted to give the president a blank check."