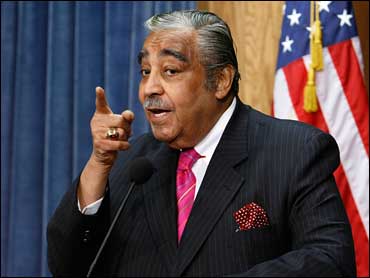 Rep. Charles Rangel wrote six checks for about $10,800 in back taxes, and then penned an open letter to New Yorkers Friday, saying he has done nothing dishonorable and is the target of a Republican "guerrilla war."

Rangel, the senior member of the New York congressional delegation, has faced a string of embarrassing revelations - he didn't pay taxes on rental income for a beach house in the Dominican Republic; he used three rent-stabilized apartments in New York City, including one for a campaign office; he used his congressional stationery to solicit private donations to a college center named after him.

He wrote checks to cover taxes due on his 2004, 2005, and 2006 returns, related to the unreported rental income, said his chief of staff, George Dalley.

Rangel also tried to assure constituents he did nothing to shame his office.

"I've never violated the public trust, so I'm not worried," Rangel wrote in a letter, e-mailed by his campaign. "Last July, the Republican Party declared guerrilla war against Democrats and since then has made every effort to smear me and members of my party."

A House ethics committee plans to investigate, and Republicans have called for the 19-term congressman to be removed from his powerful position as chairman of the tax-writing Ways and Means Committee. Rangel was able to keep the post after a meeting with House Democratic leaders earlier this week.

When asked Friday in an interview with New York's WCBS-TV how the chairman of the House tax writing committee, could get into tax problems, Rangel said: "I can just say that it is a series of mistakes that are unconscionable, but we're not talking about any intention to avoid or evade the law."
By Associated Press Writer Devlin Barrett