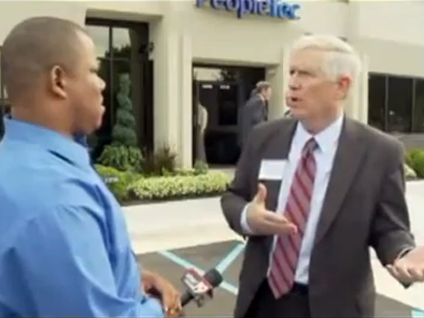 Rep. Mo Brooks, an Alabama Republican, is taking heat over comments he made last month saying that when it comes to illegal immigrants, "I will do anything short of shooting them."

"Anything that is lawful, it needs to be done because illegal aliens need to quit taking jobs from American citizens," Brooks said in an interview with Alabama television station WHNT, an excerpt of which was posted to YouTube. (Watch at left.)

As the San Antonio Express-News reports, Brooks' comment, reportedly first made in a town hall meeting and then repeated on camera, has prompted the head of the Congressional Hispanic Caucus, Democratic Rep. Charlie Gonzalez of Texas, to criticize Brooks for "rhetoric referencing acts of violence."

Arguing that "words have consequences," Gonzalez added that Brooks "chose irresponsible words that reflect a hateful, dehumanizing undercurrent in the discussion on immigration."

Brooks hails from Alabama, where governor Robert Bentley recently signed one of the toughest immigration laws in the nation; among other things, it mandates that public schools check students' immigration status, allows police to arrest suspected illegal immigrants stopped for other reasons, and criminalizes giving a ride to someone you know to be an illegal immigrant.

Brooks told WHNT that illegal immigrants "are clogging up our emergency rooms and making our education system more expensive," adding that a local jail is overstuffed with "illegal aliens."

Republicans have largely argued that the United States should not move forward with comprehensive immigration reform until U.S. borders are made more secure. President Obama, congressional Democrats and a handful of congressional Republicans have pushed for immigration reform as well as the DREAM Act to provide a path to citizenship for some illegal immigrants who entered the United States before age 16.

As the Express-News reports, Gonzalez said that while disagreements on the issue can be expected, "elected officials have a special responsibility to lead by example and not engage in destructive and hateful speech."

A spokesperson for Brooks could not immediately be reached for comment.