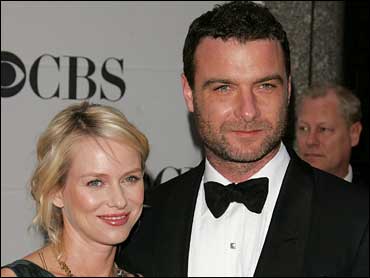 Actors Liev Schreiber and Naomi Watts have not secretly tied the knot, a publicist for Schreiber told The ShowBuzz on Tuesday.

On Monday, "Entertainment Tonight" reported that Schreiber said at the Tonys on Sunday that the two had tied the knot. "We are married. You got it first. Break the story!" Schreiber said.

Apparently his quip was a joke.

The couple, who attended the Tonys together, are expecting their first child in August. "We don't know what we're having," Watts told TV's "The Insider."

Schreiber received a Tony nomination for his role in the play "Talk Radio."

Schreiber told APTN news that he and Watts may take a break from acting when the baby is born.

"We will see. Part of what bring us together is that we both love what we do. We like to do it a lot," he says. "It makes us feel whole and it makes us feel strong. I think that we are going to take a break. We both talked about the fact that we love to work and that makes us who we are."

Schreiber doted on his partner as he spoke to reporters on the red carpet.

"This has been probably the best year of my life, and it wouldn't be the same if she were not here," Schreiber told APTN.