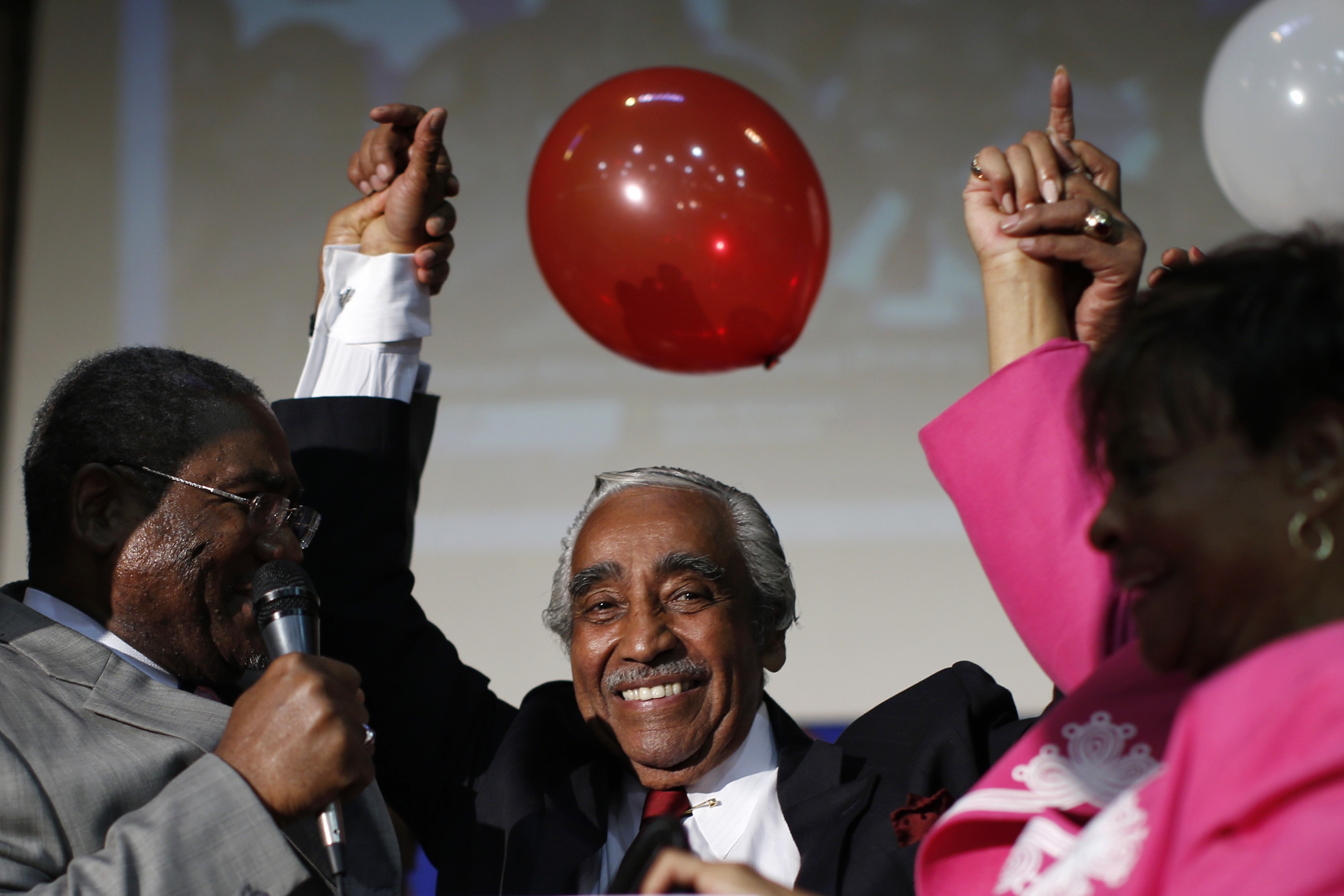 NEW YORK - Rep. Charles Rangel, the face of Harlem politics for generations, declared victory in a fierce primary fight to return to the House of Representatives, but with ballots outstanding, the race was deemed too close to call.

With 99 percent of the vote counted in unofficial results early Wednesday, Rangel led state Sen. Adriano Espaillat, 47.4 percent to 43.7 percent. There was a difference of fewer than 2,000 votes out of about 47,000 votes cast.

The Associated Press was not declaring a winner because the city Board of Elections was unable to say how many absentee and affidavit ballots were outstanding. The counting of those paper ballots can take up to two weeks, beginning later Wednesday.

Rangel, 84 years old, was first elected to Congress in 1970. During his time in office, his once predominantly African-American district has gone through dramatic demographic changes. In 2013, newly-drawn political boundaries created a district merging Rangel's traditional northern Manhattan constituency with parts of western Bronx, giving the 13th district a 55 percent Hispanic - mostly Dominican - majority.

Both candidates' election night parties filled up with supporters, who danced to music while nervously keeping an eye on the TVs broadcasting results.

Balloons dropped at Rangel's election night party as he said he had won.

Espaillat took the stage at his rally to say the race was too close to call. But his staff then dismantled his stage and the election night party abruptly ended.

The race has sharply divided New York City's political heavyweights and shed light on the changing face of a district once one of the nation's black political power bases.

Rangel, known as the Lion of Harlem, was once arguably the most influential black elected official in the U.S., known for his gravelly voice, impeccable suits and staunch liberal views, including his outspoken opposition to apartheid and the Iraq War.

Espaillat, vying to be the first Dominican-born member of Congress, fell just about 1,000 votes short of defeating Rangel in the 2012 primary. Race and ethnicity has historically been a factor in New York elections, and this one was no different.

At a debate, Rangel said Espaillat "wants to be the Jackie Robinson of the Dominicans in the Congress," adding that Espaillat should tell voters "just what the heck has he done besides saying he's a Dominican?" He also pointed out a flier that Espaillat was responsible for in 2012 that accused another Dominican official of "betraying his community" for his support of Rangel.

The comments drew a sharp rebuke from Mayor Bill de Blasio, a former Rangel campaign manager, who made no endorsements in what was expected to be a low-turnout race.

Even though Espaillat is a legitimate threat to Rangel -- and voters have long been familiar with the congressman's history of ethical problems -- polls leading up to the race showed Rangel with a comfortable, double-digit lead. Pollsters, however, have a long track record of underestimating minority voter turnout.

The race was made more competitive in its final days when the New York Times endorsed Espaillat, though Rangel had his own big-name endorsements to boast of. The congressman's campaign released a robocall featuring former President Bill Clinton encouraging voters to show up at the polls to support Rangel.

Some voters leaving their polling places Tuesday said they had chosen Rangel, while others said they agreed with Espaillat, who suggested the veteran lawmaker had lost touch with his district and was overdue to exit the stage.

"I thank Congressman Rangel for his service, but I feel like at some point you've got to hang up the crown and move on," said Kwame Jackson, a former contestant on "The Apprentice," who voted for the Rev. Michael Walrond.

In the heavily Latino Washington Heights neighborhood, Estela Uceta said she voted for Espaillat, whom she knows from his work on issues including housing and services for the elderly. She said this was her first time not voting for Rangel.

"Sometimes, you know, people need a change," she said. "I think he has been doing a good job but maybe not for this area."

But Lily Cabrera voted for Rangel.

"I feel that he has the ability to do a better job," she said.