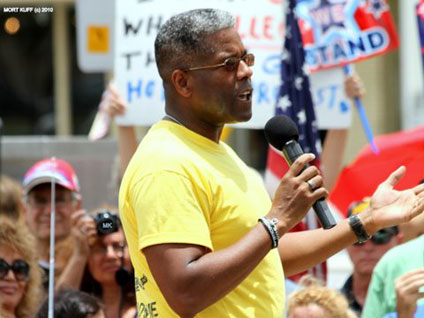 Tea Party-aligned Allen West, the only Republican member of the Congressional Black Caucus (CBC), sent a letter to CBC Chairman Emanuel Cleaver today, asking him to disassociate the group with what he calls "race-baiting."

The letter comes in response to remarks from CBC members Andre Carson and Maxine Waters. Last week, Carson said some Tea Party-backed members of Congress would love to see African Americans "hanging on a tree." At a separate event, Waters said the Tea Party "can go straight to hell." Both remarks were premised on the notion that Tea Party-backed Republicans have blocked an economic agenda that would help minorities.

"As Chairman of the CBC, I believe it is incumbent on you to both condemn these types of hate-filled comments, and to disassociate the Congressional Black Caucus from these types of remarks," he wrote. "Otherwise, I will have to seriously reconsider my membership within the organization."

Carson's remarks were baseless and amounted to race-baiting, West said, adding that he considers race-baiting a racist tactic.

"All of us, especially Congressman Carson, Congresswoman Waters and others who have engaged in racially-motivated rhetoric, should follow the example of Dr. Martin Luther King, Jr., not the example of Reverend Jeremiah Wright," he wrote.