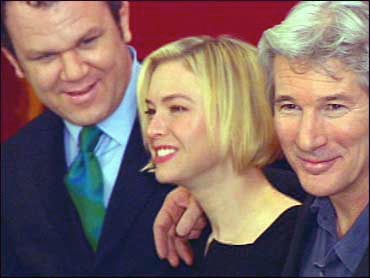 At 33, Renee Zellweger has already won two Golden Globe Awards and earned two Oscar nominations – the latest, as Best Actress, for "Chicago," for a role that required her to do two things she'd never done before on screen: sing and dance.

To play flapper-era murderess Roxie Hart in "Chicago," Zellweger, with no previous training, had six weeks to learn how to sing and dance. As moviegoers have discovered in recent weeks, reports 60 Minutes II correspondent Charlie Rose, she holds her own – and then some – alongside a veteran of London musicals, Catherine Zeta-Jones.

The singing and dancing of the two actresses has helped "Chicago" earn more than $80 million at the box office so far and helped make the soundtrack one of the best selling albums in the country.

Zellweger said she discovered that singing and dancing are simply an extension of acting.

"It's emoting through those moves," she says. "And it's extraordinary. It's big. And the same with the singing. It literally gives voice to what you're feeling. And it's so powerful. It's so powerful to express yourself in not just a one-dimensional way, but to put it out there all over the place, with all of your senses."

She may look like the girl next door, but don't be fooled. She is talented enough to make acting look easy, and confident enough to take risks. In "Bridget Jones' Diary," the other movie for which she earned an Oscar nomination, she gained 20 pounds and mastered the queen's English.

In "Nurse Betty," she played a delusional stalker; but Zellweger made her lovable. She can even make a memorable mark in forgettable films, like the sequel to the "Texas Chainsaw Massacre."

Matthew McConaughey, Zellweger's costar in that forgettable film, has known her since their days at the University of Texas.

"She's got a quirkiness about her that she always carries to her roles - then and even now - but she's still very accessible," he says. "She always has a point of view with whatever character, but she desperately needs somebody. And whether you call that a vulnerability, that's what I think makes her really accessible - where people go, 'I understand what she's going through.'"

Zellweger grew up in the small town of Katy, Texas, 30 miles west of Houston. Her days at Katy High School were filled with cheerleading and running track but not a lot of dating.

"I watched a lot, you know? I was an observer," she says of those days. "And I watched the girls get their heart broken. You know? Get their hearts broken repeatedly, and just not understand. 'But he said he loved me…' You know?"

She told Rose she was determined not to go down that road.

"I was just a little leery of having my name thrown around the field house, let's say," she jokes. "I wasn't interested in that, you know? They wrote graffiti on the bathroom walls: Don't waste your money on Renee."

After high school, the blonde with the wholesome reputation went to the University of Texas in Austin, where she majored in English and worked to make ends meet, at one point waiting tables at a topless bar called Sugars.

"Oh, I'm not embarrassed about it at all," she says. "There are certain things about myself that I know to be sure. And taking my clothes off and dancing or doing things that I felt were compromising my convictions, that's not an option. It was never an option. And I cannot tell you how invaluable that life experience was for me.

"In fact, I would say that I got as important an education cocktail waitressing as I did in the halls of the University of Texas."

She says she learned about the misconceptions people have about good and bad, about human behavior, about men and about their relationships with women. "It was very interesting," she says. "It taught me so much."

In college, she began acting in low-budget films shot in Texas. You could literally blink and miss her in such movies as "Dazed and Confused" and "Reality Bites."

She finally landed a starring role in the "Chainsaw Massacre," and moved to Hollywood at age 24.

After two years in Los Angeles, sometimes working nights as a bartender's assistant at a Hollywood hole-in-the- wall, she landed one of the most coveted roles in the business, playing a single mother opposite Tom Cruise in "Jerry Maguire."

The film grossed more than $270 million and transformed Zellweger into a star. Seven years later, her star has risen so far and so fast that even she can't believe it.

"I'm not an actor at all," she says. "I was the girl who went to the audition, and pretended to be an actor. I had no intentions of it. And so, I'm a fraud, basically."

"Chicago," a movie about how celebrities are made, has made Zellweger an even bigger celebrity, and the shy actress doesn't seem entirely comfortable in the role of movie star. Though her love life makes headlines, she remains unmarried and unattached, more interested in making movies than in making the tabloids.

She admits she sometimes wishes she had someone to share her life but says she doesn't "fixate" on that.

"It seems not gracious, in some way, to look at all the blessings I have in my life and say, 'But what about...'

"I don't need anything. As far as I know, my health. I do what I love for a living and I don't have to leave work to find joy. My parents will have a dignified old age and hopefully, if I play my cards right, so will I. And what else do you need?"