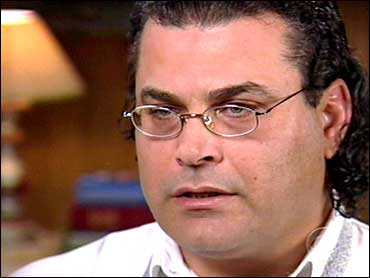 The Secretary of State last week had to tour Europe fending off charges that the United States is illegally kidnapping and torturing suspects in the war on terror.

But most everywhere Condoleeza Rice went, she was peppered with questions about the man you're about to hear from.

Kalid al-Masri is a 42-year-old car salesman from Germany. His incredible story of kidnapping, imprisonment and interrogation has helped expose a secret U.S. tactic now known as "rendition." A CIA unit called the rendition group has used a fleet of unmarked planes to snatch suspects around the world. Well over 100 people have disappeared this way.

But a number of these suspects have been flown to prisons notorious for torture. And some, like Khalid al-Masri, may have been rendered by mistake.

One of the CIA's rendition jets is a Boeing 737 that 60 Minutes found in Scotland, apparently during a refueling stop. According to flight logs, it would seem to be the same plane that swept Kalid al-Masri away from his home and family in the winter of 2004.

Al-Masri told 60 Minutes he was on vacation in Macedonia when he was snatched off a bus and ended up in the hands of a group of silent masked men.

"They took me to this room, and they hit me all over and they slashed my clothes with sharp objects," says al-Masri.

How did they cut off his clothes?

"Maybe knives or scissors. I also heard photos being taken while this was going on – and they took off the blindfold and I saw that there were a lot of men standing in the room, they were wearing black masks and black gloves," he says.

Al-Masri says after his clothes were removed, the men pulled a hood over his head, put a diaper on him, shackled him on the plane and injected him with drugs. He had been "rendered" in a program developed in part by former CIA officer Michael Scheuer.

"The option of not doing something is extraordinarily dangerous to the American people," says Michael Scheuer, who until last year was a senior CIA official in the counterterrorist center. Scheuer created the CIA's Osama bin Laden unit and helped set up the rendition program during the Clinton administration.

"Basically the National Security Council gave us the mission, take down these cells, dismantle them and take people off the streets so they can't kill Americans. They just didn't give us anywhere to take the people after we captured them," says Scheuer.

So, the CIA started flying suspects to Egypt and Jordan. Scheuer says renditions were authorized by Clinton's National Security Council and officials in Congress, and all understood what it meant to send suspects to those countries.

"They don't have the same legal system we have. But we know that going into it. And so, the idea that we're going to suddenly throw our hands up like Claude Raines in Casablanca and say, 'I'm shocked that justice in Egypt isn't like it is in Milwaukee,' there's a certain disingenuousness to that," says Scheuer.

Scheuer admits Egyptian justice can be rough and that he assumes that officials there use torture.

Doesn't that make the United States complicit in the torture?

"You'll have to ask the lawyers," says Scheuer.

"It's convenient in the sense that it allows American policy makers and American politicians to avoid making hard decisions," says Scheuer. "Yes. It's very convenient. It's finding someone else to do your dirty work."

The indispensable tool for that "work" is the fleet of executive jets authorized to land at all U.S. military bases worldwide.

Scheuer wouldn't talk about the planes that are used in the operations, since that information is classified. The CIA declined to talk about it but it turns out the CIA has left plenty of clues, out in the open, in the public record.

The tail number of one Gulfstream jet was first reported by eyewitnesses to a rendition in Pakistan in 2001. In public records, the tail number came back to a company called "Premier Executive Transport Services," with headquarters listed in Dedham, Massachusetts. But Dedham is a dead end. Premier appears to be a CIA front company. The address is a law office on the second floor of a bank. There was one thing in the records that did lead somewhere: a second tail number.

That number belonged to an unmarked Boeing 737 jet, the plane 60 Minutes found in Scotland. Using the Web and aviation sources, 60 Minutes was able to find 600 flights to 40 countries. It appears the number of flights increased greatly in the Bush administration after 9/11.

The planes have been based in North Carolina. They usually fly to Dulles Airport outside Washington before heading overseas. Major destinations read like a roadmap to the war on terror: 30 trips to Jordan, 19 to Afghanistan, 17 to Morocco, 16 to Iraq. Other stops include Egypt, Libya, and Guantanamo Bay, Cuba. The flight log shows one flight took the 737 to Skopje, Macedonia, from there to Baghdad, and finally to Kabul, Afghanistan. It's a flight that matches the date Kalid al-Masri says he was taken.

"When I opened my eyes in the cell, I saw some writing in Arabic on the walls… And the inmate in the cell next to me told me we were in Kabul and the guards who guarded us all the time were Afghani so it was clear that it was Afghanistan," says al-Masri.

He showed 60 Minutes a prison floor plan he drew from memory. He says other prisoners were from Pakistan, Tanzania, Yemen and Saudi Arabia. Al-Masri told 60 Minutes he was interrogated by an American through an interpreter.

"He yelled at me and he said that 'You're in a country without laws and no one knows where you are. Do you know what that means?' I said 'Yes,'" al-Masri says.

What did it mean to him?

"It was very clear to me that he meant I could stay in my cell for 20 years or be buried somewhere and nobody knows what happened to you," he says.

Al-Masri says he was asked whether he had contacts with Islamic groups like al Qaeda or the Muslim Brotherhood, or aid organizations.

Al-Masri says he told the Americans he had never been involved in militant Islam. He says he was beaten and kept in solitary confinement.

"The whole time was bad. We were mistreated, humiliated, we were treated worse than animals. The food they gave us were leftover bones or chicken skin and the like," says al-Masri.

Al-Masri says he was questioned for five months, then released just as mysteriously as he was taken, put back on the unmarked plane, flown to Albania, and dropped by the side of a road.

"I was in a place where there were no people, in the dark, and they told me to take a path and not look back. I walked along the path and thought they would shoot me in the back," says al-Masri.

Al-Masri says he expected his life was going to end that way. He says he was surprised when they didn't shoot him in the back.

"Yeah, I had a funny feeling. I thought they have this problem with me and they want to get rid of me some way, maybe in an unsuspecting country," he says.

Did anyone ever tell him that they had made a mistake?

"They told me that they had confused names and that they had cleared it up, but I can't imagine that. You can clear up switching names in a few minutes," says al-Masri.

An intelligence official confirmed to 60 Minutes this was a case of mistaken identity. The agency realized its mistake when a technical analysis proved al-Masri's German passport was genuine.

Last week on her European tour, Secretary of State Rice acknowledged rendition is a weapon in the war on terror.

But she added this: "The United States does not transport and has not transported detainees from one country to another for the purpose of interrogations using torture."

And yet according to the flight logs, there are frequent flights to places like Tashkent, Uzbekistan, a country with a well-known reputation for torture. Craig Murray is the former British ambassador to Uzbekistan, and told 60 Minutes Uzbek citizens, captured in Afghanistan, were flown back to Tashkent on the American plane.

"I know of two instances for certain of prisoners who were brought back in a small jet and I believe it was happening on a reasonably regular basis," says Murray.

In Uzbekistan, he says, many prisoners are subject to torture techniques straight out of the Middle Ages.

"Techniques of drowning and suffocation, rape was used quite commonly. And, also insertion of limbs in boiling liquid," says Murray.

Ambassador Murray complained to his superiors that British intelligence was using information gleaned by torture. He was recalled by London last year and quit the Foreign Office.

Murray says the CIA "definitely knows" that people are being tortured in these jails. "I asked my deputy to go and speak to the CIA head of station and she came back and reported to me that she had met with the CIA head of station who told her that 'Yes, this material probably was obtained under torture but the CIA didn't see that a problem.'"

The CIA disputes that. The agency told 60 Minutes the meeting Murray described didn't happen. The CIA also says it does not knowingly receive intelligence obtained by torture.

Mike Scheuer says that, in his experience, the U.S. asks receiving countries to promise that suspects will be treated according to the laws of that country.

"I personally think that any information gotten through extreme methods of torture would probably be pretty useless because it would be someone telling you what you wanted to hear. The information we have received as a result of these programs has been very useful to the United States," says Scheuer.

Scheuer says if some of that useful information is gleaned by torture, it's okay with him. "I'm responsible for protecting Americans," he says.

Last week, al-Masri filed suit against the CIA's former director, George Tenet, and three of its front airline companies. He alleges he was kidnapped, beaten, drugged, held incommunicado and humiliated. He appeared at a news conference via satellite because the U.S. wouldn't let him in the country.

In Germany, the German chancellor says the U.S. has admitted privately that al-Masri was abducted in error, but Dr. Rice wouldn't talk about it. An intelligence official told 60 Minutes the agency is investigating a handful of cases – fewer than ten – in which other suspects may have been rendered by mistake.

How does the CIA know if they are picking up the right people?

"You do the best you can. It's not a science. It's gathering as much information as you can, deciding on the quality of it and then determining the risks the person poses. If you make a mistake, you make a mistake," says Scheuer.

After five months in captivity, al-Masri finally made his way back home only to find his wife and four children had moved to Lebanon to be with her parents. All they knew was that he had disappeared.

Did his wife believe him?

"She did. I never lied to her, and my appearance showed that I had been in prison," says al-Masri.

He says he also told his seven-year-old son what happened to him and that his son understood. Who did he tell his son did this to him?

"I said it was the Americans," says al-Masri.
By Graham Messick