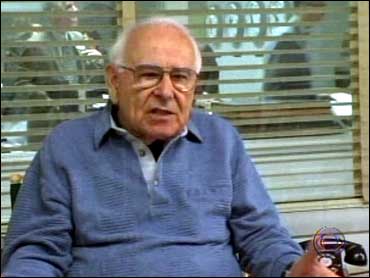 Milo Radulovich died yesterday of complications of a stroke. He was 81.

His name might be unfamiliar to some, but he played a key role in halting the Cold War anti-communist crackdown of the 1950s. And his case was championed by CBS News - and a legendary correspondent.

In 1953, Edward R. Murrow devoted an entire broadcast to Milo Radulovich, a 28-year-old lieutenant in the Air Force Reserve, who was discharged as a security risk - but not because of anything he had done, CBS News correspondent Bill Plante reports.

"My sister and dad have taken, have read, what are now called subversive newspapers," Radulovich told CBS News at the time.

The Air Force believed his family had communist sympathies and denied his appeal - without showing any evidence,

"If I had said, I will cut those ties, everything would have been beautiful," Radulovich said.

"He was just the type of fellow who would say, 'what in the hell is happening to this country that we love'," Wershba recalled.

"We believe that the son shall not bear the iniquity of the father, even though that iniquity be proved, and in this case it was not," Murrow said.

The Air Force reinstated Radulovich, whose story heightened awareness of the Cold War assault on civil liberties. It led to Murrow's famous broadcast on Sen. Joseph McCarthy, who was ultimately censured by the Senate.

Two years ago, Radulovich consulted on "Good Night, and Good Luck," the movie about Murrow. Shirley Wershba, who also worked for Murrow, on "See It Now" said Radulovich never forgot.

"He felt that this had saved his life and he felt he's made a contribution," Wershba said.

Radulovich wasn't the only American deemed a security risk. But he was one who chose to fight back.