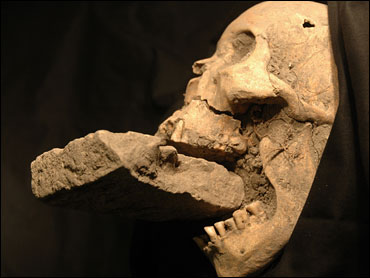 An archaeological dig near Venice has unearthed the 16th-century remains of a woman with a brick stuck between her jaws - evidence, experts say, that she was believed to be a vampire.

The unusual burial is thought to be the result of an ancient vampire-slaying ritual. It suggests the legend of the mythical bloodsucking creatures was tied to medieval ignorance of how diseases spread and what happens to bodies after death, experts said.

The well-preserved skeleton was found in 2006 on the Lazzaretto Nuovo Island, north of the lagoon city, amid other corpses buried in a mass grave during an epidemic of plague that hit Venice in 1576.

"Vampires don't exist, but studies show people at the time believed they did," said Matteo Borrini, a forensic archaeologist and anthropologist at Florence University who studied the case over the last two years. "For the first time we have found evidence of an exorcism against a vampire."

Medieval texts show the belief in vampires was fueled by the disturbing appearance of decomposing bodies, Borrini told The Associated Press by telephone.

During epidemics, mass graves were often reopened to bury fresh corpses and diggers would chance upon older bodies that were bloated, with blood seeping out of their mouth and with an inexplicable hole in the shroud used to cover their face.

"These characteristics are all tied to the decomposition of bodies," Borrini said. "But they saw a fat, dead person, full of blood and with a hole in the shroud, so they would say: 'This guy is alive, he's drinking blood and eating his shroud."'

Modern forensic science shows the bloating is caused by a buildup of gases, while fluid seeping from the mouth is pushed up by decomposing organs, Borrini said. The shroud would have been consumed by bacteria found in the mouth area, he said.

At the time however, what passed for scientific texts taught that "shroud-eaters" were vampires who fed on the cloth and cast a spell that would spread the plague in order to increase their ranks.

To kill the undead creatures, the stake-in-the-heart method popularized by later literature was not enough: A stone or brick had to be forced into the vampire's mouth so that it would starve to death, Borrini said.

That's what is believed to have happened to the woman found on the Lazzaretto island, which was used as a quarantine zone by Venice. Aged around 60, she died of the plague during the epidemic that also claimed the life of the painter Titian.

Much later, someone jammed the brick into her mouth when the grave was reopened. Borrini said that marks and breaks left by blunt instruments on several among more than 100 skeletons found by the archaeologists show that the grave was reused in a later epidemic.

Such a reconstruction of events is plausible, as is the link to the superstitions about "shroud-eaters," said Piero Mannucci, the vice president of the Italian Society of Anthropology and Ethnology.

"Maybe a priest or a gravedigger put the brick in her mouth, which is what was normally done in such cases," Mannucci said.

The anthropologist, who did not take part in Borrini's research, said that at a time when bacteria were unknown, such superstitions were a way for the terrified population to explain the waves of plague epidemics that killed millions during the Middle Ages. Jews were also often accused of spreading the disease.

Borrini said the discovery shows that vampires in popular culture were originally quite different from the elegant, aristocratic blood-drinker depicted in Bram Stoker's 1897 novel "Dracula" and in countless Hollywood revisitations.

"The real vampire of tradition was different," he said. "It was just a decomposing body."