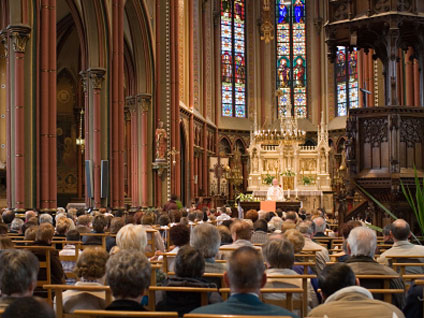 People who regularly attend religious ceremonies are less depressed and have a more positive outlook on life, according to the study, published in the Nov. 10 issue of the Journal of Religion and Health. The study suggests those emotional benefits may bring healthier habits like visiting doctors more, or smoking and drinking less.

For the study, Yeshiva University researchers surveyed nearly 93,000 women over the age of 50 from all ethnicities, religions, and economic groups. The researchers mined the results to look closely at the women's emotional health, looking at optimism, depression, cynical hostility, and factors related to social support and strain.

The study is a follow-up to a 2008 study that tied attending services to reduced death rates by 20 percent compared to people who never attend, Reuters reported.

What's the deal? Is the Almighty repaying service-goers back for their piety?

"The person who says, 'I guess if I go to services, that will make me more optimistic' - while a possibility, that may not be true," study author Dr. Eliezer Schnall, an associate professor of clinical psychology at Yeshiva University in New York, told Reuters. "There is a correlation, but that does not mean there is causality. One could argue people who are more optimistic may be drawn to religious services."

Schnall also said the study only looked at older women, so the benefit might not apply to men or younger folks.

Previous religious research has suggested that some of the health benefit come from the social interaction and friendships formed at services.

"We're trying to connect the dots here," Schnall said. "We know they're less likely to die, and health outcomes can be related to psychological factors."

But religion might not always be rosy. Schnall told CNN, "there also comes with it a social strain." Religion can lead to disagreements with family members, clergy, or fellow parishioners.

Tell us what you think: Do you agree with the study?

What is having monkeypox like? Survivor opens up on illness and recovery
Ryan Jaslow