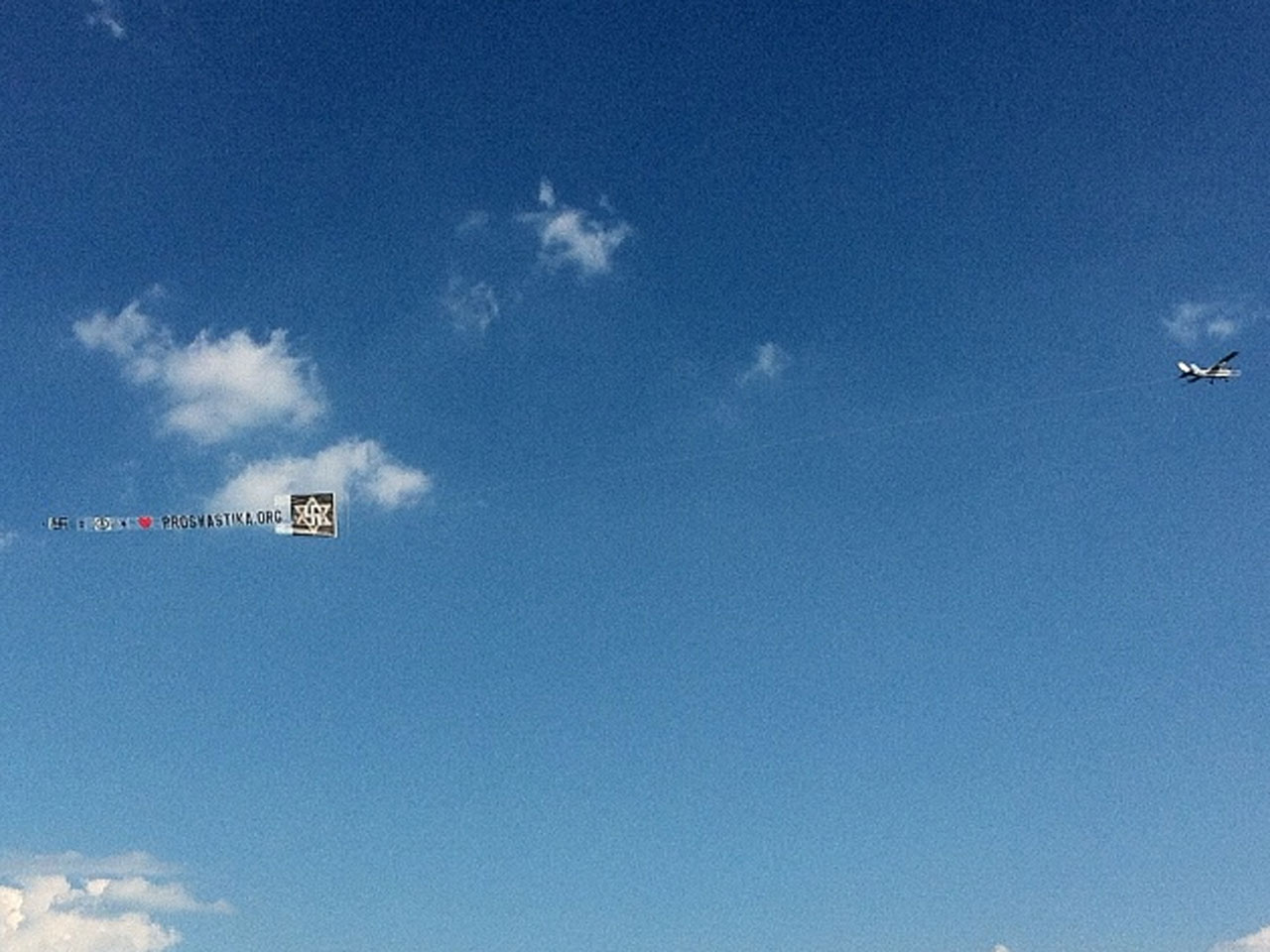 (CBS News) LONG BEACH, N.J. - A religious group defended its display of a swastika over New Jersey beaches on Saturday, arguing it was trying to bring it back as a peaceful symbol rather than promote antisemitism.

The International Raelian Movement said a small plane dragging a banner with a swastika above Long Beach was a part of Swastika Rehabilitation Day, an attempt to "re-educate" the public about the symbol's pre-Nazi roots.

"Why should the swastika, a symbol of peace for more than 1.5 billion people in the world, offend the people of Manhattan?" said Thomas Kaenzig, Swastika Rehabilitation Day coordinator, said in a press release on the Raelian official website.

Beachgoers were shocked to see the image, which included the swastika symbol inside a Star of David and promoted the website proswastika.org. One Twitter user, Samantha Wagner, took a picture of the banner and asked, "Shd this symbol rly be revived? Roots aside, isn't the neg connotation to much?"

New York Times reporter Corey Kilgannon also snapped a picture of the banner after it flew over Manhattan. Don Pripstein, the president of the Jewish Community Center in Long Beach Island, New Jersey, told reporters he questioned the flyer's intentions.

In a response directed to Pripstein, the North American Raelian Movement director said they were trying to "negate - not forget the hate and fear carried out by Hitler and his followers."

"If the Jewish people would not hide in terror in the presence of this symbol but instead embrace it's true meaning, the world would stand in awe of this act of love," wrote Ricky Roehr.

Pripstein said regardless of what message the group was trying to get across, publicly displaying the swastika is still inappropriate.

"The image of the swastika is still so ingrained in the Jewish people," Pripstein said. "So many people have parents or grandparents who were affected by it. The image is so profound, a detestful thing ... it seems too soon."

The organization, which claims to have over 70,000 members worldwide, believes a group of scientists from another planet called the "Elohim" created life on Earth thousands of years ago. There is some debate about whether or not they should be classified as a cult.

The Raelians said they also flew the banner along the U.S. West Coast, Australia and handed out flyers on the streets of Tel Aviv, Israel and Karlsruhe, Germany. (In Germany, it is illegal to show the swastika in public and the group said they are sending someone to court to challenge the law.)

Kaenzig, the coordinator of Swastika Rehabilitation Day, said the images didn't receive as much outrage in other parts of the world as it did on the East Coast.